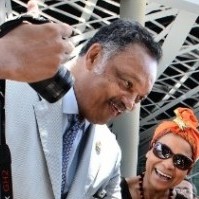 During his five-day visit to the French Caribbean archipelago of Guadeloupe, American Civil rights leader and Baptist minister, Reverend Jesse Jackson, toured the “MEMORIAL ACTe,” the world’s largest museum dedicated to the Memory and History of Slavery from the early seventeenth century to present day.

Already called the “POMPIDOU CENTER” or the “MuCEM” of the Caribbean for its impressive architecture and interactive content, Rev. Jackson’s visit to the Memorial ACTe, comes just two months after the inauguration which was attended by French President François Hollande and 19 heads of States from Africa and the Caribbean. Rev. Jackson arrived on the main island of Guadeloupe on Saturday afternoon and received a warm welcome by the Guadeloupe Islands officials and residents. After his official visit to the Memorial ACTe, Rev. Jesse Jackson commented:

“This is the most phenomenal museum of its kind in the whole world. I have been to museums in numerous cities across the world, we are now building a significant one in Washington DC, but this is the most complete museum of ours in the world and this is not the last one. It is the signal we need more museums to tell us about our story.”

By spearheading this project, the Guadeloupe Islands wanted to contribute to the building of a universal and shared memory of Slavery. The intent of the Memorial ACTe is to give voice to memory and to become a cultural and humanitarian beacon of light for the French Caribbean archipelago to the world.

“The Memorial Acte is the first of its kind—an interactive, educational, and thoughtful walk through history that provides the ultimate platform for the coming together and celebration of the culture and history of all people of the African Diaspora. It surely attracts tourists from throughout the world, visitors and people of all races and cultures. The new non-stop air service to the islands of Guadeloupe from the East Coast is just a perfect timing for Americans,” said Gaynelle Henderson – CEO of Henderson Travel, No. 1 U.S. Tour Operator in Black history Tours.