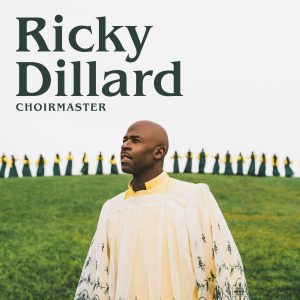 The GRAMMY®-nominated and electrifying choir director Ricky Dillard brings choir music back to the choir stands with his Motown Gospel album debut, Choirmaster, available for preorder across all digital platforms today.

Joined by his choir, New G, Dillard shines on his new project, which includes the already-popular radio single “Release” featuring Tiff Joy, the mid-tempo choir groove “Since He Came,” and the remake of a New G classic on “More Abundantly Medley.” As a prayer for the uncertain times the world is facing, Ricky Dillard also releases the fourth song and live performance video from the new album today—the passionate “Let There Be Peace On Earth.”

Recorded live to a sold-out audience in Chicago last Fall, Choirmaster returns to the churchy sound and style of choir music in 11 spirit-filled and soul-refreshing tracks. Choirmaster is classic Ricky Dillard and New G in every way, harkening back to the innovative sound that elevated his career and established him as a pioneer and iconic choir force.

Ricky Dillard, a multi-GRAMMY®-nominated artist and architect of contemporary choir music, has been sharing his gift with the world for more than three decades. Recently celebrated for his contribution to choir music in Rolling Stone and TIME magazines, he has made an immeasurable mark on the genre and inspired some of the most successful artists in the music industry. In addition, he has shared the stage with the likes of Patti LaBelle, Jennifer Hudson, Queen Latifah, Debbie Allen, Bonnie Raitt and P. Diddy.