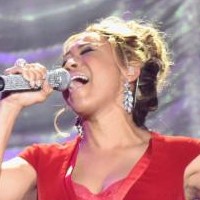 Entertainment One Music (eOne Music) dominated this year’s 30th Annual Stellar Gospel Music Awards taped on March 28th in Las Vegas, winning half of the 28 categories with a total of 14 awards including most of the major categories: Artist of the Year, Song of the Year, Albertina Walker Female Vocalist of the Year, Choir of the Year and CD of the Year. Celebrating wins for the #1 hits from Erica Campbell, Ricky Dillard, William McDowell and Michelle Williams, career honors were also bestowed with Bishop Paul S. Morton receiving the James Cleveland Lifetime Achievement Award, and Pastor Shirley Caesar and Ricky Dillard inducted into the 2015 inaugural class of Stellar Honors honorees with special medallions.

eOne Music also delivered powerful performance moments on stage, as Michelle Williams kicked off a soaring opener with a never-before-seen live performance of her single “Say Yes” joined by Beyoncé and Kelly Rowland, Dorinda Clark-Cole joined Deitrick Haddon on his new hit “My City,” Jonathan McReynolds delivered an acoustic performance of new single “Pressure,” Erica Campbell performed a “More Love”/”Help” medley, and Ricky Dillard closed the show for the second year with a blowout choir finale, performing a medley of “The Holy Place”/”Take Me Back”/”The Light”/”Grace” this year.

“Wow! It’s truly a blessing to receive these honors capping an incredible past year for our artists, and celebrate the creative gifts and work that continues to inspire so many fans across the globe. There is more new music coming on the horizon, and congratulations to all the nominees and honorees this year,” Phil Thornton, eOne Music Vice President and General Manager of Urban Inspirational says of the 14 Stellar Award wins and 3 honors this year.

The 30th Annual Stellar Gospel Music Awards will air on TV One on Easter Sunday, April 5, 2015.