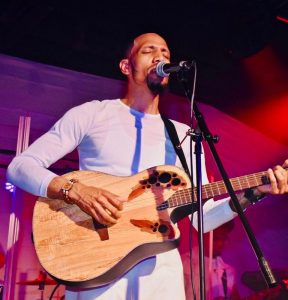 For over a decade, the Judah Band has been infiltrating the gospel music industry with its own unique brand of feel-good rhythms, a fusion of fashion fads and elaborately produced concept music videos.

They reached a new height of success earlier this year with their current radio single, “For My Good,” which has been garnering over 20K streams a week on various social media platforms such as YouTube and Spotify. They’ve also been recently signed to Light Records and have released two EP’s “For My Good,” and “More Than I Ever Expected,” in anticipation of the upcoming album “Gone Fishin’,” expected to be released late this summer.
Now, the group’s charismatic lead singer, Randy Weston, has revealed that the ensemble’s breakthrough hit, “For My Good,” was inspired by his personal battle with cancer. On National Cancer Survivors Day, the lead singer shared his story of triumph over the dreaded disease.
“Being diagnosed with cancer was one of the toughest things I ever faced in my life, but it was in this tough time that God did some extraordinary things,” he says. “He recalibrated me and began to download sounds and songs in me that would change the course of my life forever. He gave me this song `For My Good’ to let me know that it may not look good and it did not feel good, but it was working out for my good. I want you to know whether you are facing cancer or other difficulties in life that God is working it for your good. Be inspired to keep fighting.”