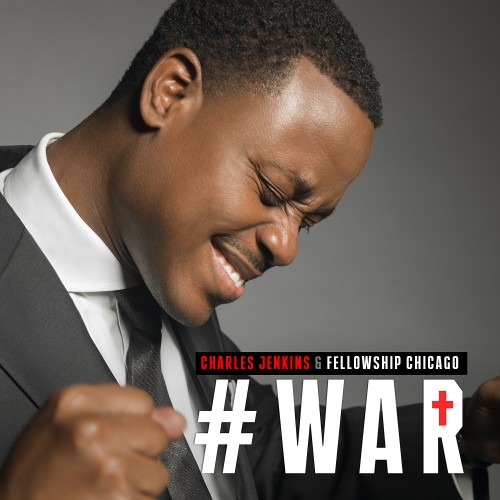 Pastor Charles Jenkins & Fellowship Chicago maintain their #1 slot on this week’s Billboard Magazine Gospel Airplay chart with the bestselling radio smash “#War” for the third consecutive week. The New Orleans marching band-flavored battle cry is a declaration of hope and determination that’s being sung by church choirs and praise teams around the globe since its release last fall. “Thousands of people have adopted #WAR as their personal fight song,” Jenkins says. “There is so much going on in the world and real people are fighting real battles everywhere.  We don’t want #WAR to simply be a song that we sing on Sunday; we want it to be a daily reminder that we are on a mission to #WAR against whatever that thing is that’s in the way of our destiny.”

In the fall, Pastor Jenkins and his wife Dr. Tara are releasing a #WAR Prayer Guide and curriculum on www.charlesjenkins.com so that like-minded people can gather to study, pray and fight to win in life as a team. In the meantime, in a play off of a verse from the song, the couple has launched the www.youcanthavemy.net website where believers can download memes expressing the specific battle they are at #WAR with in their lives. They then post it on their social media with the hashtags #WAR and #Thismeanswar.

The shepherd for the 8,000-member Fellowship Chicago church, Pastor Jenkins burst into the national spotlight when he and the Fellowship Chicago choir’s radio debut “Awesome” topped Billboard Magazine’s Hot Gospel Songs chart for 22 weeks in 2012.  It won a BMI Award in 2014 for over 50,000-lifetime radio spins. The album “Best of Both Worlds” debuted at #1 on Billboard’s Gospel Album sales chart, garnered 5 Stellar Awards, multiple Dove Award nominations, appearance at Jay Z’s “Made In America” festival and more. Please visit  www.charlesjenkins.com for more news and information.