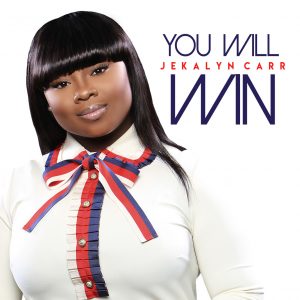 GRAMMY-nominated powerhouse singer Jekalyn Carr’s current radio single “You Will Win” celebrates 25 consecutive weeks in the Top 5 on Billboard’s Gospel Airplay chart this week. The single debuted in the Top 5 on December 6, 2017 and landed at #1 on February 3, 2018 spending six weeks in that position. “You Will Win” is Carr’s second consecutive #1 single (“You’re Bigger”).

Carr has received numerous testimonies from across the world that “You Will Win” has encouraged them not to live beneath highest potential, which has led to her launching her first-ever You Will Win Conference on June 21-22, 2018 in Southaven, MS. The conference is about imparting Life Strategies to help you win. Carr has been sharing the winning message to inspire and push people to win in life over their negative circumstances and that they’re victorious.

The nightly services are free will consist of speakers such as, Jonathan Ferguson and Jekalyn Carr. You can expect life changing messages. This is a conference that will inspire your whole household. The focus of the conference is to educate, offer growth and to help you incorporate God in everything that you do.