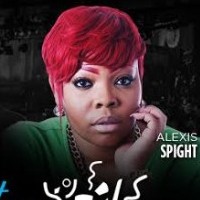 Spight’s new single, “All the Glory” is #10 on Billboard’s Gospel National Airplay chart, #3 on the Gospel Indicator Songs chart and #8 Gospel Mediabase chart. The video, “All the Glory” recently debuted on Vevo.

“We are pleased with the progression of radio airplay on ‘All the Glory,’” says Greg “Uncle G” Lyons, CEO of Uncle G Records. “The new music is phenomenal, I believe Alexis fans will be surprised with the range and depth on her new project. This summer Alexis will be on the Dear Diary promo tour travelling all over the country and this fall; she will head to Brazil and other countries in South America, South Africa, Africa and Europe.”

The 2012 first-runner up of Season Five of BET’s Sunday released her debut album, L.O.L.: Living Out Loud, which peaked at #1 on the Billboard Top Gospel Albums chart. The album garnered two Stellar Gospel Music Awards nominations including New Artist of the Year and Contemporary Female Vocalist of the Year.