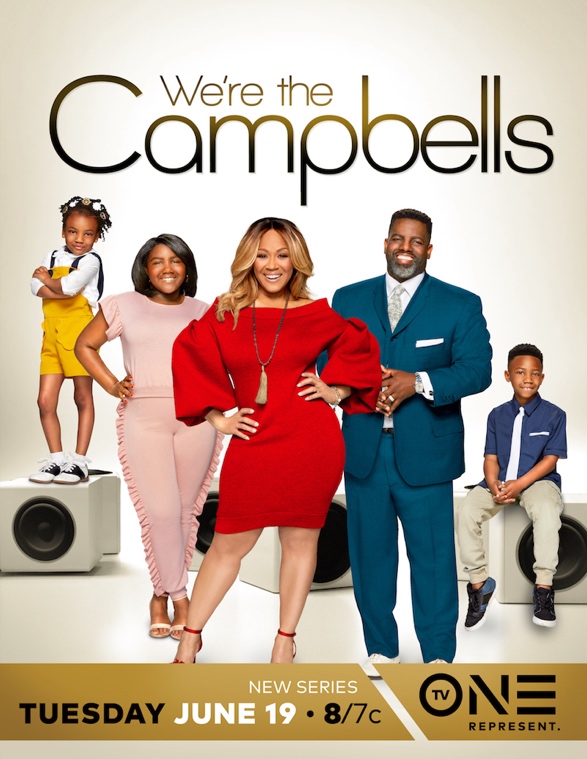 TV One’s new docu-series WE’RE THE CAMPBELLS, starring gospel music superstar Erica Campbell and mega producer Warryn Campbell premieres Tuesday, June 19th at 8/7C. Watch the trailer here.
The nine-episode docu-series gives viewers an intimate glimpse into the lives of Gospel entertainment power couple Warryn and Erica Campbell, as they tackle the everyday struggles that come with balancing family and work, nurturing their marriage, building their individual careers, and fostering their faith; all while raising their three children Warryn, Zaya and teenager Krista. TV One will also feature the couple in its ongoing online series #BLACKLOVE and a digital exclusive after show …WITH WARRYN & ERICA. The weekly online companion content will get up-close-and personal with Warryn and Erica, as they reveal how they have dealt with common issues that could make or break any relationship.
WE’RE THE CAMPBELLS is produced for TV One by Entertainment One (eOne). Executive Producers are Tara Long, Mark Herwick, Kim McCoy, Warryn Campbell and Erica Campbell; Co- Executive Producer is Narvin Russaw. For TVOne, Tia Smith is the Executive in charge and Sr. Director of Original Programming & Production; Donyell KennedyMcCollough is Sr. Director of Talent, and Robyn Greene Arrington is Interim Head of Original Programming and Production.