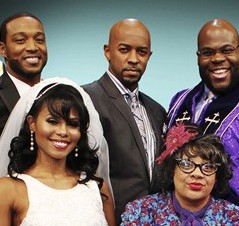 Arriving on DVD and Digital HD and Video on Demand on today is Tyler Perry’s Hell Hath No Fury Like a Woman Scorned – The Play from Lionsgate Home Entertainment. Below are faith-based exclusive clips from the thought-provoking play. Inspired by a successful young woman’s real-life adventures, this poignant musical weaves together a strong message of faith, inspiration and strength from which viewers will learn heartfelt life lessons. This sneak peek gives audiences a brief look at what it means to not give up on how God wants us to live our lives even when we have been “wronged”. The play also showcases lessons about what forgiveness truly is and learning to let go.

About Tyler Perry’s Hell Hath No Fury Like a Woman Scorned – The Play unfolds through the life of Anita (Cheryl “Pepsii” Riley), a single woman who has it all – a great job, a loving family, and the ability to pay for her baby sister’s wedding. According to her best friend, however, there’s only one thing missing…the love of a good man. At her friend’s insistence, she meets the seemingly perfect man online and all seems well, until he convinces her to get married in Las Vegas and her life quickly spirals out of control at her new husband’s demands. Can she regain the upper hand, or will the tides turn for the worse?

Featuring live music and uplifting songs, Tyler Perry’s Hell Hath No Fury Like a Woman Scorned – The Play DVD contains behind-the-scenes interviews and will be available for the suggested retail price of $19.98.