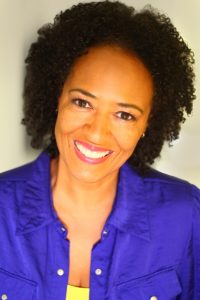 When New Yorkers tune-in to WLIB 1190 AM between 11 AM and 3 PM weekdays (Sundays 12-3 PM), they hear compelling testimonies from a who’s who in the church community, a good dose of laugher and a lot of great gospel music. That’s when veteran radio personality, Liz Black, holds court with the hundreds of thousands of people who show up every weekday to hear her “Inspirations with Liz Black” program which is also syndicated nationally via the Pittsburgh, PA-based, American Urban Radio Network.

A huge part of Black’s allure is her warm smile and open heart to which so many fans gravitate. She’s all over the tri-state area like a politician running for re-election, hosting concerts, organizing coat drives and mentoring up-and-coming singers. It’s no surprise that her tireless work has earned Black a fourth Stellar Gospel Music Award nomination as Radio Personality of the Year. “Liz is a blessing to her community and beyond,” says Skip Dillard, Operations Manager for WBLS/WLIB in the Big Apple. “You can’t out-hustle her! She’s always there when you need her and spreading the Word of God is her mission! I pray she wins!”

Black started winning at other things early in life. She began modeling and acting professionally as a youth and continued to do so into adulthood. However, her life spiraled downward when she was introduced to marijuana and graduated to crack cocaine. “Drugs make you selfish,” she says. One day, she bought a stash of drugs, came home and didn’t save any for her boyfriend who was also a user. “I took too much and I was dying,” she says. “My heart wasn’t beating normally, I was in severe pain. I had a decision to make.” Should she call her parents, an ambulance or her boyfriend? She called her man who rushed over and found that she had gotten high without him. “He said I got what I deserved for not sharing,” she recalls. “He took my dog and left me on the floor to die.”

Black managed to drag herself to the shower where she cried out to God for a clean heart and she says,” A beam of light came out of the showerhead and covered my body. It was the first time I felt real love, real joy, and peace in my life. The pain stopped and I never did drugs again.” Black had not been in a church in nine years, so she found her way to a youth meeting and began to attend church. During that period, Black says that God revealed that radio and TV was in her future. She found her way to WMCA, a Christian station, where the program director, Kevin Cottrell, who taught her the engineering side of radio. “I didn’t go to school for it,” Black says. “Kevin was my school.  For two years. He showed me the ins and outs of running the board.”

From there, Black started hosting an overnight show on WFDU 89.1 FM in Teaneck, NJ and stayed there for 8 years. Then, in 2007, she went to WLIB, which was a new learning experience.  “Even though I had been in radio, it was a different jungle,” she confesses. “You had to learn the ways of that environment. Skip [Dillard, the Program Director] sat down with me once a week to make sure I perfected my craft. Even though, I had been on air, there was still a structure that I was missing. Nobody does that nowadays. “

One of the fan highlights of Black’s show is the Corporate Prayer segment. “When I meet people on the street, one of the first things they say is, `I pray with you everyday,’” she adds. “It changes lives. There’s still power in prayer. ” She knows first hand. “When I was using drugs, I had been stopped at the George Washington Bridge with enough drugs to be considered a dealer and was released,” she says… “It was only God’s favor that I don’t have a criminal record. I could have gone to prison.”

Instead, she’s going to Las Vegas for the Stellar Gospel Music Awards on March 24th. “It’s always an honor just to be nominated and, although, I’d like to win; if I don’t, my love for my listeners will not change and I’m still pumped to be with them everyday,” she says. Black is happy with the way her radio shows are growing – including a Sunday morning show on WBLS 107.5 FM, New York’s top R&B station – and hopes to get back into TV. “Back in the day, I did TV commercials and all of that stuff but I’d love to do something that is faith-driven.”

In 2016, she was the voiceover host for the full season of BET’s short-lived, “Joyful Noise” musical TV series that starred Tye Tribbett. “That was a totally new world for me and it was so much fun,” she says. “I’m disappointed the show didn’t continue but I want to do more voiceover work and TV, so I have more things to accomplish.”

Since she’s weathered many a storm in her life and career, does Black have advice for others breaking into the often-inclement world of entertainment. “Yes,” she says emphatically. “Never grade yourself based on someone else, stay in your own lane and continue to push and keep the faith and always be yourself.”