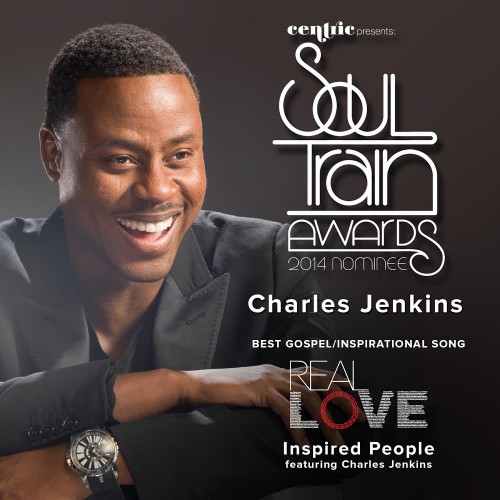 GRAMMY® Award-winning songwriter and Inspired People recording artist Pastor Charles Jenkins may soon add a new accolade to his crowded trophy cabinet. Best known for his uplifting anthem “Awesome” (#1 for 22 weeks on Billboard’s Hot Gospel Songs chart in 2012), Jenkins demonstrated his musical eclecticism earlier this year by releasing the pulsating track “Real Love.” The infectious groove has now earned Pastor Jenkins and his backing group, Inspired People, a Soul Train Award nomination in the category of Best Gospel/Inspirational Performance. The show tapes at the Orleans Arena in Las Vegas on November 7th and airs on BET and Centric on November 30.

“It’s a huge & unexpected honor,” says Jenkins who is pastor of Fellowship Chicago, a booming urban church in the Windy City. “Like so many others, I grew up not just watching but dancing to Soul Train every weekend. I pretended that I was on the dance floor live from my house. This is an overwhelming feeling, not only for me; but for my family and friends too. I’m really looking forward to attending this amazing event.”

The riveting rhythm is a joyous mash-up of Euro dance and club beats with a polished urban coating and a simple message of agape love that makes the song appealing to a broad audience. The festive concept video boasts vignettes of “Real Love” and has earned over a half million views on Inspired People’s You Tube channel.

“Real Love is a song that responds to so many living pictures of hatred and pain in the world,” Jenkins adds. “In a time of so much violence and conflict I asked people how did they define love. After receiving several different definitions, mainly pointing to something external or conditional, I was prompted to study the word Love, write the song, create a video and share it around the world. My hope was to paint a clear picture of the meaning of Love in its rawest meaning and inspire all of us to a higher level of active, functional unconditional Real Love everyday and everywhere.”

Pastor Jenkins launched the Inspired People recording label to create music to inspire listeners to encourage and improve themselves in this adventure called Life. The firm’s mantra is that “Inspired People, Inspire People!” For more information and to shop for “Inspired People” T-shirts and apparel, logon at www.inspiredpeople.music.net.