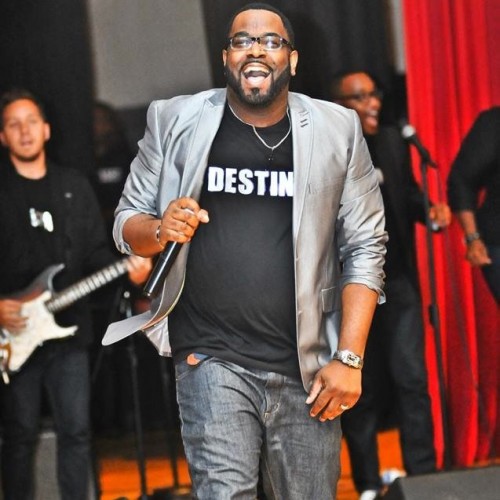 Some Hollywood movers and shakers in the Gospel Industry Community turned out to support newcomer Kevin LeVar during his L.A. pre-release concert at One Church International.  Film Producer Devon Franklin was on hand to introduce Kevin to audience; Television Exec/Manager, Holly Carter; Gospel Music couple, Ted and Tina Campbell; and Felicia Henderson  (sitcom writer for ‘Fresh Prince” , “Soul Food” and “Moesha”) were front and center when Kevin hit the stage.  After the concert, the diverse audience wanted to purchase multiple copies of upcoming release.  It was clear LeVar was well received when one woman requested 20 copies of the advance CD to share with family and friends along with others who committed to purchase enough copies to pass on.

On Tuesday, August 12 One Sound Entertainment and Central South Distribution is set to release Destiny!  Live at the Dream Center and More…  The first single “Your Destiny” penned by LeVar and produced by Harmony Samuels continues to steadily have an increase in spins at radio.  If the request for music is any indication of what’s to come, then it’s safe to say great things are in store and more…. for Kevin LeVar.

LeVar hit the town armed with a fresh musical experience that left the audience knowing there is something special about him.  Every now and then you come across a talent that you can’t squeeze into a box and tie it with a bow and Kevin is that talent.  He’s not only musically gifted, but has a heart for empowering people and spreading the good news in song.  When you experience Kevin in concert you get the best of both worlds…music and ministry.

Returning to the location where his upcoming album was recorded, LeVar was invited back to the Dream Center to minister at all three Sunday services held at Angelus Temple near downtown L.A.   Also ministering in music was jazz guitarist, Jonathan Butler, who raved over and instantly embraced  the single, “Your Destiny.”

LeVar kicked off his first promotional pre-release concert earlier this month in his hometown of Maryland  at City of Praise Church ( Pastor Joel and Ylawnda Peeples)  hosted  by WPRS’ very own Cheryl Jackson.  The standing room only crowd was on their feet the majority of the night dancing, singing and worshipping along with LeVar.