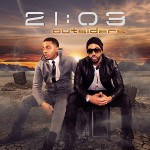 21:03 is set to hit the road with PMG Label artist J Moss this March, on the, ‘RV: Road Trip Promo Tour.‘ Tour stops include, Chicago, IL; St. Louis, MO; Indianapolis, IN and Atlanta, GA. The tour also includes the “21:03 Celebrity After Party Series.” Fans don’t want to miss it!

6) Square Circles/Great Are You Lord