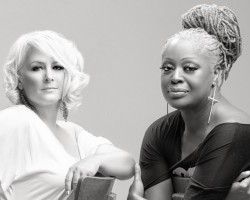 Emerging female duo AsOne delivers an innovative sound to the music industry with their forthcoming self-titled debut release AsOne (360MusicWorx/Capitol Christian Distribution/Universal Music Group) available in stores and on all digital platforms Tuesday, June 23rd. Everything about this musical work is revolutionary. From the group themselves, consisting of Lisa Wright and Theresa Bailey who are the first interracial female duo in music history across all genres, to the breathtaking production that’s reminiscent of a movie soundtrack, to heart stirring, soulful vocals.

AsOne’s album release event will take place this Saturday, June 20th at the Capitol Theatre located at 110 West Main Street in Lebanon, Tennessee (near Nashville). The event starts at8pm and is FREE to the public.