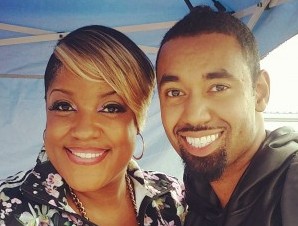 Singer/songwriter Bryan Andrew Wilson is really laboring as he heads into Labor Day weekend promoting his radio single “Turning Away” that is #19 on this week’s Billboard Gospel Airplay chart. Wilson just spent this past weekend in Philadelphia performing at Praise Philly 103.9 FM’s annual “Praise in the Park” concert on a bill featuring Smokie Norful, Ricky Dillard, Kierra Sheard, Beverly Crawford and Wilson’s longtime family friend Anita Wilson. He then sang at the prestigious Sharon Baptist Church in the city of brotherly love and is now on his way to Charlotte to perform at 2X Salt Ministry Friday night and at Generation One Church on Saturday afternoon before dashing up the east coast to sing at The Master’s Child Worship Center in District Heights, MD on Sunday morning. Wilson is on the road for most of September. He kicks the month off in Perry, Florida, and then heads to Augusta, SC for Shout 94.7 FM’s annual Shout Fest where he’ll share the bill with label mate Dorothy Norwood, Canton Jones, Isaac Carree, Patrick Dopson and others.  He finishes the month out with performances in Charleston, SC and Columbia, SC before heading to New York in October. “Turning Away” hails from the 30-year old singer’s fifth solo CD “The One Percent” (EchoPark Entertainment). Wilson made his splash in the gospel pool as the ten year old soloist for “His Eye is on the Sparrow” with The Mississippi Children’s Choir in 1994.  He released Dove and Stellar Award nominated CDs for Malaco Records before taking a recording hiatus to attend Claflin University and Princeton Theological Seminary. Wilson returned to the recording booth in 2008 with the critically acclaimed CD “A Second Coming” that featured the radio single “My Soul Boasts in the Lord.”