Bounce TV has Most-Watched Quarter Ever, Thanks to Original Series, “Mann and Wife” Starring David and Tamela Mann 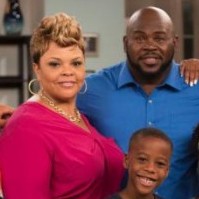 Bounce TV, the nation’s first-ever and fast-growing broadcast television network designed for African American audiences, continued its ratings surge in the just-completed second quarter of 2015, setting network records for viewership and the delivery of key targeted demographic audiences in both Primetime and Total Day with June becoming the network’s most-watched month ever.

Helping fuel the network’s strong performance was the first season of the original series Mann & Wife starring David and Tamela Mann. The show was a smash hit, delivering more than 6.2 million viewers and 4.0 million homes across all plays in its first season on the air.

Bounce TV is the fastest-growing African-American (AA) network on television and has become the #2 most-watched among all AA networks.  The network airs on the digital broadcast signals of local television stations and corresponding cable carriage and features a programming mix of original and off-network series, theatrical motion pictures, specials, live sports and more.  Bounce TV has grown to be available in more than 85 million homes across 90 markets, 90% of African American television homes — including all of the top AA television markets — and three quarters of the total television homes in the United States.