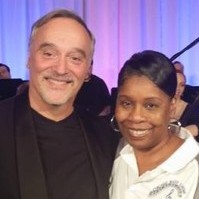 Since it’s inception, 25 years ago, the legendary Chicago Mass Choir has been favored to share it’s music and collaborate with countless organizations and music artists on National and International platforms.

On Saturday, August 1st, Chicago Mass Choir continued in a great tradition of monumental collaborations, as they joined the Chicago Chamber Orchestra during the American Bar Association’s annual meeting in Chicago, IL.

To add to this historical moment, Chicago Mass Choir’s performance was followed by the 83rd U.S. Attorney General Loretta Lynch, who served as the key note speaker.  Chicago Mass Choir was well received by notable attorneys and city representatives who were in attendance.

Chicago Mass Choir was honored to be requested and embraced by the American Bar Association and to collaborate with the Chicago Chamber Orchestra.

The choir’s president, Dr. Feranda Williamson, shared her heart and sentiments from Chicago Mass Choir:  “It was an honor to work with the Chicago Chamber Orhestra and was so glad we were able to coordinate our music together.”

Chicago Mass Choir’s collaboration with the Chicago Chamber Orchestra was a historical prelude to the release of their new radio single, “Thank You, Thank You Jesus”, from their upcoming 2016 release, We Give You Praise on New Haven Records.