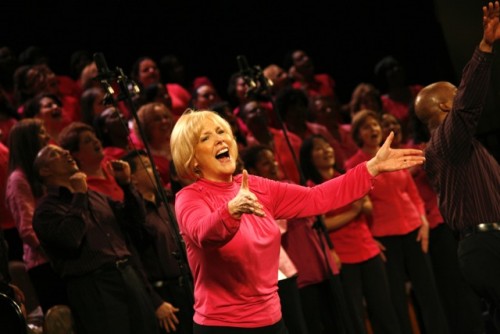 The iconic Grammy Award winning Brooklyn Tabernacle Choir is recording a live album and the general public is invited to attend the event. The choir’s founder Carol Cymbala and her in-house musical team has crafted over a dozen inspiring new songs that return the gold-selling ensemble to its musical roots on what will be its 28th musical release.

“This is taking us back to the concept of our first album Giving Him Thanks back in 1981,” says Brooklyn Tabernacle Music & Conference Administrator Kevin K. Lewis. “This is totally live with no studio tracking.  Our recent recordings have included studio tracking that didn’t give us freedom we felt we needed. Carol wanted to go back to what defined our sound in the beginning because Brooklyn Tabernacle is best when it’s completely live and spontaneous.”

The as yet untitled CD will be recorded over the course of two live concert sessions taking place Friday, September 26 @ 7:00 PM and Sunday, September 28 @ 3:00 PM at The Brooklyn Tabernacle located at 17 Smith Street, Brooklyn, NY 11201. The general public is encouraged to come and share in this musical celebration. All seats are free and available on a “first come, first serve” basis.

Carol Cymbala founded the nearly 300-voice Brooklyn Tabernacle Choir, a blend of ethnic and economic backgrounds with members ranging from lawyers and doctors to former drug addicts, in 1973.  Over the years, the choir has sung at hallowed venues such as Radio City Music Hall and Madison Square Garden. They’ve appeared on “Good Morning America” and other national television programs.

Their amazing legacy includes six Grammy Awards, seven Dove Awards, two #1 Billboard charting CDs and over four million albums sold. The choir performed “The Battle Hymn of the Republic” at the 2013 Presidential Inauguration ceremony that had a worldwide viewing audience of over a billion people. Its latest CD “Love Lead the Way” debuted at #1 on iTunes Christian/Gospel Albums chart in 2014. Visit http://www.brooklyntabernacle.org for more news on the choir.