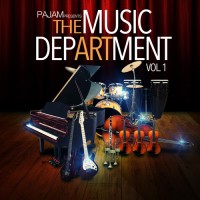 PAJAM presents The Music Department Vol. 1, will be released digitally on August 21, 2015.