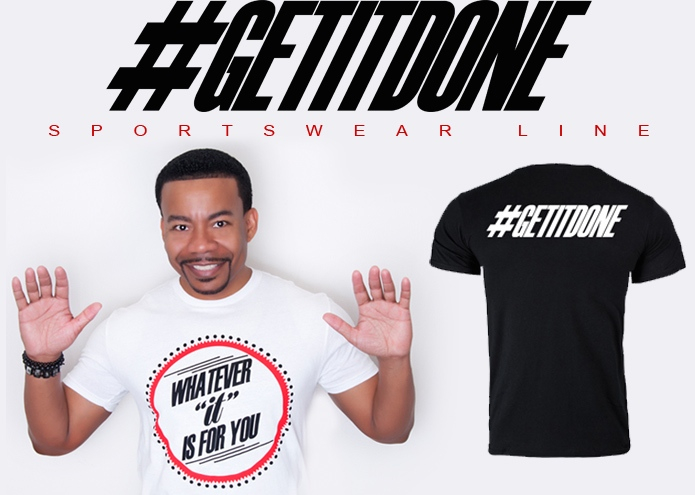 Nationally syndicated radio personality Lonnie Hunter is known for gospel radio hits such as “Anyway” and “Even Me (The Drip Drop Song).” For the last seven years, he’s also been equally known as a popular radio host and currently hosts the highly rated Radio One afternoon drive program, “The Lonnie Hunter Show.” Now, the Chicago native is adding the #GETITDONE sportswear apparel line to his long list of accomplishments. “I am always excited to see one of our Radio One family members expand; and this new #GETITDONE sportswear line is exactly what we all need in this season, to catapult us into greater success,” says Cathy Hughes, Radio-One Founder.

Hunter launched #GETITDONE on March 1st. “It’s a motivational line of clothing for whatever your it is,” says Hunter who was a print model earlier in his career. The idea for the line came to him during a New Year’s Eve church service where he was thinking about all of the New Year’s resolutions people make but never complete. “It’s about people doing that which they are meant to do because procrastination is out of style.”

#GETITDONE currently features unisex T-shirts, hats and sweatpants. In July, the clothing line will also boast garments specifically designed for women. Yolanda Adams will be sporting the clothes as she serves as a judge on the forthcoming season of BET’s highly rated “Sunday Best” program. “This line is both current and necessary for anyone with a life plan,” Adams says.

The response to #GETITDONE has been enthusiastic and intense. The company offers a wide range of sportswear products designed to motivate people.  “It’s not just another fashion statement; it’s a movement,” says singer Earnest Pugh “It’s the proper attitude to have towards fitness but it can also work in every aspect of your life.”

#GETITDONE is available online at www.lonniehuntermusic.com but will soon be available at specialty stores in every market that broadcasts Hunter’s radio show.