Home / Artists / Josilyn Drake Reveals Cover For New Album, ‘I Will Worship You’

Josilyn Drake Reveals Cover For New Album, ‘I Will Worship You’ 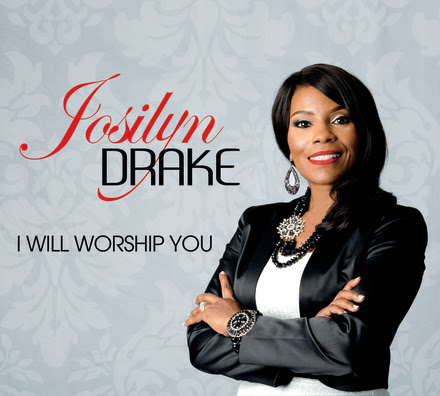 Josilyn Drake is an amazingly gifted vocalist who is a dedicated worshiper, a passionate lover of God, and “Birmingham’s Best Kept Gospel Secret,” says The Birmingham Times. With a crystal clear soprano voice, obvious gift for writing profound worship ballads, her quiet and almost shy demeanor has been a giant personal transition in moving from the background into the forefront as a solo artist in the gospel music industry.  Now Josilyn steps forward with God-filled authority, equipped with a collection of powerful songs and life changing music to impact the hearts and minds of all who desire to lift HIM up via her new album I WILL WORSHIP YOU.

In 2011, during her personal time with the Lord, God began to give Josilyn songs, confirming a word spoken over her life almost two decades ago. In the space of two months, she had received all the songs for her debut project I WILL WORSHIP YOU.  The recording process was an exciting time for Josilyn. “I am thrilled to be in the studio recording my own CD,” Josilyn shares.  “Although I have been in the studio before, it is wonderful to be working on my own music.”

Josilyn is the sole writer on her freshman album I WILL WORSHIP YOU.  She tapped into a paragon of producers to sculpt the project.  Her current radio hit single “Worship You”, a tender melodious ballad, was produced by Birmingham’s Clinton Green.  Green also produced “Keep Us Lord”, her first radio single, which was chosen as a selection taught at the prestigious Gospel Music Workshop of America and nominated for the 2014 Rhythm of Gospel Award for Praise & Worship Song of the Year.  Josilyn’s comforting, beautiful vocals also helped garner her additional nominations forWorship/Praise Artist of the Year and Best Performance Praise and Worship Artist of the Year.

Josilyn also sought after Gary Diggs of New Jersey to produce and her friend and multiple Grammy™ and Stellar Award Winning hit maker Kevin Bond to put the immaculate touches on the album. “Josilyn brings a uniqueness and purity to her worship presentation,” states Bond.  “Prepare to be transcended into the presence of God as she ministers to you.”

With an arsenal of elite producers at the helm of her project, Josilyn’s sole desire is “to create and offer music that will elevate the consciousness of people to connect with and adore Christ and in response to their lifted consciousness, it will yield an act of worship that creates continuous moments of GOD ENCOUNTERS,” she continues, “I pray that these songs leave a positive influence in the earth. It’s truly an honor to be able to place something in the atmosphere that I believe will bring forth change in people’s lives.”

In addition to being anointed for music ministry, Josilyn has also been called to the preaching ministry.  She is pursuing her Bachelor Degree in Biblical Ministries at Trinity International University in Deerfield, Illinois.  In between studies and recording her album, she is also writing a book Returning To My First Love that will release in 2015.

Josilyn is slated to sing songs from her forthcoming CD on WATC TV’s Atlanta Live Television program on Friday, October 31 at 7PM EST.  The multi-talented songstress has launched an all new website and will release I WILL WORSHIP YOU on her own independent label KJD Sounds in January of 2015.