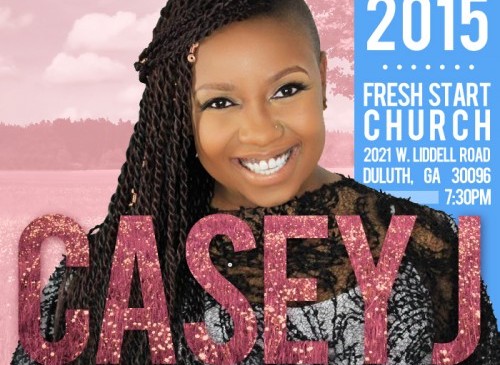 Gospel’s latest Top Ten sensation Casey J, who is currently #3 on Billboard’s Gospel Airplay chart with the radio smash  “Fill Me Up”, is set to record her first Tyscot Records CD “The Truth” during a live recording session on Friday, January 30, 2015 @7:30 P.M. at the Fresh Start Church in Duluth, Georgia, a suburb of Atlanta.

The praise and worship set will be produced by keyboardist/guitarist Chris Carter (who produced “Fill Me Up”) and Korey Bowie who’s collaborated with artists ranging from Angie Stone to Cece Winans. Casey J’s music director Rick Watford, who’s played guitar on recording sessions for artists as diverse as Dorothy Norwood and R&B crooner Will Downing, will supervise the band. Singer Jason Nelson, known for his Top Ten hits such as “Shifting the Atmosphere,” “Nothing Without You” and  “I Am,” will duet with Casey J on one of the tracks. The project is tentatively scheduled for a Spring release.

In the meantime, Tyscot Records is releasing a Limited Edition Maxi CD Single featuring both the extended and radio edited versions of “Fill me Up” alongside an instrumental performance track. It hits stores February 10, 2015 with a $4.99 list price.