Derrick McDuffey and Kingdom Sound Has Heaven In View 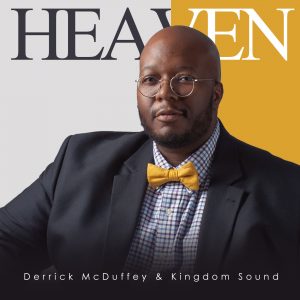 Enon Music Group continues to deliver on its promise of great gospel music for the whole world with the national release of music from Rhythm of Gospel Award winners Minister Derrick McDuffey and Kingdom Sound.  Their radio single, Heaven hits digital outlets on January 21st.

No stranger to Gospel music, Derrick McDuffey was born for such a time as this.  A native Mississippian, McDuffey received formal training in the area of classical music initially through private lessons.   He would go on to continue his studies during his tenure at William Carey University.  McDuffey nurtured a passion for coming into God’s presence and developed a love for God’s word.  He served in various musical capacities at churches around Mississippi before relocating with his wife to Portland, Oregon.  Little did he know that God was ordering his steps and preparing him for a greater work.

Following a divine impartation, McDuffie organized Chosen Generation in 1995 as a choral aggregation that worships, prays and grows together.  Chosen Generation wore their name well as they set the standard in ministering the Gospel through the medium of music with excellence.  After much prayer, McDuffie once again followed the leading of the Holy Spirit and renamed the group Kingdom Sound.  McDuffie stands firm in his convictions, believing that as the sound of the kingdom is released, God is given free course to do what he wants to do.

Over the years. Kingdom Sound has shared the stage with musical giants from various genres.  With the release of Heaven, they are distinctly positioned to carry their enduring message to all parts of the world.