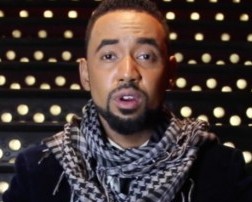 It’s been a busy week for singer/songwriter Bryan Andrew Wilson. His Top 20 comeback CD “ The One Percent” (EchoPark JDI Entertainment) earned him a Stellar Award nomination as Contemporary Male Vocalist of the Year last week and Wilson will chat about it and other exciting updates in his life on TV One’s “News One Now with Roland Martin” program.

Wilson’s new concept music video for his current radio single “Turning Away” premieres today. The soul-stirring, piano ballad peaked at #15 on Billboard’s Gospel Airplay chart this past September and continues to flourish on Billboard’s Gospel Recurrent chart. The video was produced by Optic Harmony Productions in Washington, D.C. with Robert Shanklin as director and David L. Irvin as cinematographer. “Turning Away is Wilson’s magnum opus and a contender for one of the best sounding gospel singles of 2014,” says Bob Marovich of The Journal of Gospel Music.

A Danville, IL native, Wilson came to Jackson in 1994 to record with Malaco Records when he was ten years old. During his tenure, he was produced by gospel heavyweights such as Kirk Franklin, John P. Kee and Walter Hawkins. He logged hits like “Blessed Assurance,” “Yahweh,” “God is on Your Side” and “His Eye is on the Sparrow” before taking a recording hiatus to earn a college degree from Claflin University, master’s of divinity study at Princeton Theological Seminary and to begin preaching. Wilson returned to the recording booth in 2008 with the critically acclaimed CD “A Second Coming” that featured the radio single “My Soul Boasts in the Lord.” His 2012 CD “Limited Edition featured the Top 40 hit “Everybody Clap Your Hands.”