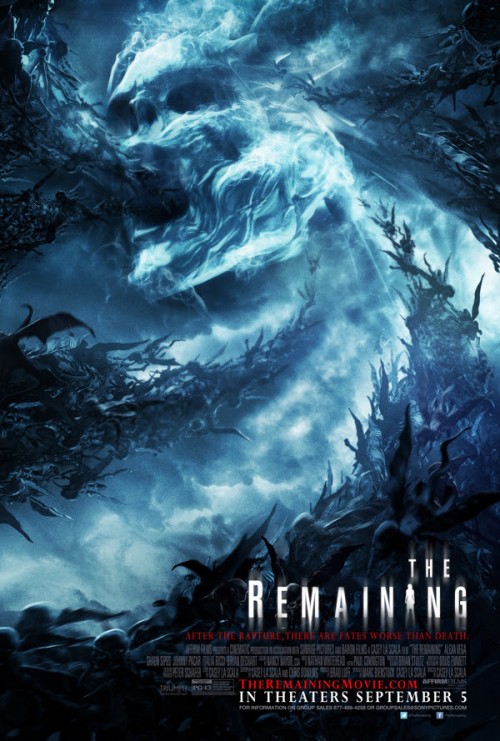 Releasing in theaters on September 5, 2014, The Remaining is an action-packed, supernatural thriller based on biblical accounts of the end times, in the aftermath of the Rapture. As a close-knit group of friends are celebrating a wedding, a series of catastrophic events turns the party into a life-and-death struggle. The young group desperately scrambles for refuge and self-preservation while a horrifying enemy unleashes its wrath against those remaining. They must figure out what is happening around them, and find a way to survive together in a terrifying new world of death and destruction.

Director Casey La Scala describes events that led him to write the script, “A couple of things happened at the same time. When my father passed a lot of things ran through my mind. One being to love the one you’re with before it’s too late, because things could end in the blink of an eye. When I had begun writing Amityville, I thought about what it would look like to have global paranormal activity. The same thoughts occurred when I was involved with the production of A Walk to Remember. Writer Nicholas Sparks has a faith-based, very family-oriented voice, which led to me think, what if I put the two ideas together? I wanted to create a story that would capture the imagination of everyone, mainstream and faith-based audiences. The Remaining captures both by centering on the extreme and horrific circumstances surrounding the biblical accounts of the end times. When the audience sees the movie they will feel like they are there.”

Producer Brad Luff adds, “The Remaining is a compelling story that is meant to entertain a broad audience while also connecting strongly with those seeking spiritually-rich content.” In order for the filmmakers to ensure the film would seamlessly speak to faith-based audiences while appealing to the mainstream, they took the script to several pastors and youth leaders around the country for their critique and input.

Early response to the film amongst Christians has been very positive. “There are few movies that provide an opportunity for evangelism, where a youth pastor can do an altar call as the credits roll. The Remaining is that movie, an important message and outreach opportunity for churches,” according to Lifeway Films’ General Manager Scott Mills.

Adds AFFIRM Films Senior VP Rich Peluso, “The Remaining is a ground-breaking venture for AFFIRM Films, exploring the thriller/horror genre to bring to life a character-driven end-of-days story that is a glimpse of what life might be like as the world we know comes to an end. The filmmakers and cast built and delivered excellent characters that pull the audience into the human journey in the midst of supernatural events.”

Alexa Vega is cast in the leading role of Skylar, the bride who is from a very religious family and, surrounded by turmoil, comes to the realization of what being a Christian is truly about. “I think it’s an incredibly beautiful story . . . Even though her family is extremely religious, she practices but was not necessarily a believer. It was amazing to play this girl that makes this transition and finds herself and her faith despite the things going on around her,” she states.

Tyndale House Publishers will be partnering with Sony in the publication of The Remaining, a novelization by critically acclaimed novelist Travis Thrasher that will release in September 2014. Readers can get a sneak peek by downloading the free e-book prologue, The Foreboding, in August (www.tyndale.com). Kingstone Comics brings top horror artist Kyle Hotz to the graphic novel adaptation of The Remaining, which is set for a mid-August release on ComiXology, at retail and on all digital platforms. Kingstone is the largest publisher of Christian comic books and Biblical worldview graphic novels worldwide, sold and distributed in 95 countries.

The Remaining is rated PG-13 for intense sequences of terror, violence and destruction throughout, and thematic elements. Running time is 87 min.