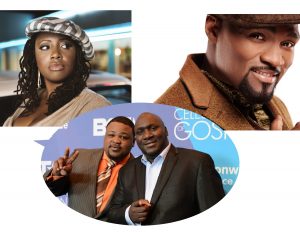 “People, people, can’t we all get along,” laughs Worldwide Music CEO Kerry Douglas about the Twitter battle that has broken out between Gospel’s Leading Man Earnest Pugh and legendary Adult Contemporary R&B song stylist, Lalah Hathaway. The melodrama started over the song “Every Promise” that Hathaway recorded with Zacardi Cortez for his debut CD release a few months ago.

Douglas is known for taking songs he really loves and having multiple artists record them until he decides he has found the version to turn into a hit. In 2008 James Fortune & FIYA recorded “I Need Your Glory” with Zacardi Cortez leading the song. Then, Douglas had Pastor William Murphy lead it on Fortune’s “Encore” CD in 2010. The next year, Douglas had Earnest Pugh record it and watched the song spend 10 weeks at #1 on Billboard’s Hot Gospel Songs chart. Douglas had the same idea for “Every Promise.”

“At first I was going to do it with Bryan Wilson who I’m excited about working with but then I thought it would be a better fit for Earnest Pugh,” says the man who promoted and marketed James Fortune & FIYA and Earnest Pugh into gospel superstars. So, Cortez’s vocals were stripped from the track and Pugh laid a new vocal. After he left the studio, Pugh was pleased with his performance and tweeted: “just finished recording a duet with @Lalahhathaway #amazing experience.” Hathaway, whom was not informed of the new recording, return Tweeted, “@earnestpugh no idea what you’re speaking of.” The heat escalated from there as fans of both artists took sides and the singers traded retorts with Hathaway calling the recording “karaoke” and Pugh responding, “Lord forgive them for they know not what they do.”

It’s not uncommon for artists to record duets from separate locations, as Frank Sinatra was one of the first to do so with his 1993 triple-platinum “Duets” CD where he and Barbra Streisand recorded their parts separately. “At the end of the day, the buck stops with me,” Douglas says of the lead single from Pugh’s new CD, “The E Factor” that’s in stores now. “I didn’t inform Lalah’s management of my plans for the song so they were caught off guard and I apologize for that but I don’t apologize for the song because it’s going to be a huge hit for Earnest Pugh and Lalah Hathaway.”

The song has special meaning for Douglas. “I’ve had a rough year or two,” he says. “I’ve come through a lot of personal and professional storms but with God’s guidance I’m still standing and I’m back. I recently thought about retiring from the music business but now I’m more motivated than ever. The song talks about holding on to the promises of God and at this stage of my life and career, all I want to hold on to are the promises of God.” Follow Kerry Douglas on Twitter at Twitter.com/MrKerryDouglas.