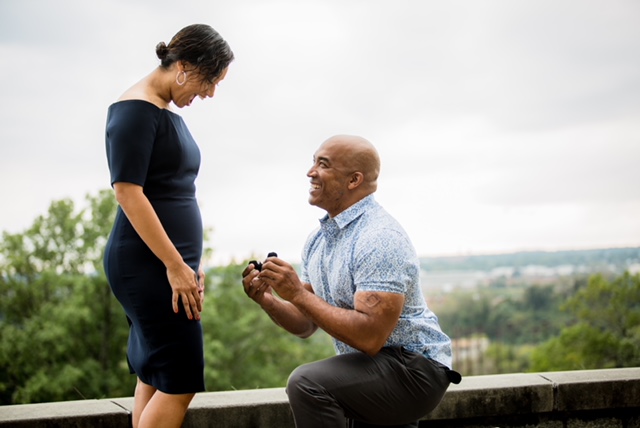 Well, it’s not spring but love is in the air. Richmond, Virginia City Councilman and pastor of the city’s Village of Faith church, Pastor Dr. Michael Jones, surprised his longtime girlfriend, June Cober, an Atlantic Records Director of Promotions, by popping the question during a ruse.

Dr. Jones lured Cober to a public park for what she thought was going to be the filming of a video to promote an upcoming church. During the filming, Jones surprised Cober and the camera crew, when he went off-script and began to propose to her. She tearfully accepted.  “June and I are happy that our two families are uniting as one,” Jones says. “God has given me a new daughter (Laila, 8), and He has given June both a new son (Jalon, 17) and daughter (Jocelyn, 20). We are tremendously blessed to find love and are super excited about taking on the world together.”

Cober, who has worked with Jones on many of his professional and philanthropic endeavors, says, “I fell in love with Mike as a cheerleader for the work he does in the community and all he represents. He’s a rare and special man, I can’t wait to work hand-in-hand with him as his wife.” The couple plans to wed in 2019.

After the proposal video was shown during one of Jones’ Sunday morning services, the congregation erupted into rapturous applause. Stellar Award nominated recording artist, Earnest Pugh, who is Senior Worship Leader at the Village of Faith, said, “I don’t believe I have ever witnessed the end of a Sunday morning service that was so emotional and wonderful. The congregation and I stood in awe as Pastor Jones played the video of the proposal as he was about to dismiss the service. The whole place went into praise. I can only imagine the wedding, which I know will be an epic time of celebration and fellowship.”