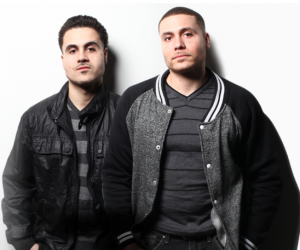 LOS PROFETAS, an Urban/Latin super duo made up of brothers Frank and Miguel Estrada, light up Christian music with their new single, “Light It Up” featuring former Group 1 Crew member Pablo Villatoro.

Their 2015 debut album EL PRINCIPIO DEL FINAL(The Beginning of the End) set the stage for the development of their undeniable sound.   They followed up with MI DESTINO (My Destiny) – an EP of 6 songs released in 2016 which features their hit “Elévame”.

Now, with their unique style and Pablo’s collaboration, “Light It Up” is the new emblematic theme of the duo in which they raise as a banner proclaiming that we must be light in the dark. Their new single is the result of a conversation between the brothers while in the studio about their reason for existing and what as Christians they are entrusted to do.

“We are all called to be light in the middle of a dark world!” Frank declares without qualms. Miguel, echoing those words adds that “we are supposed to enlighten and show people who are lost the way to Christ.”

That is the goal that the Estrada brothers set out to achieve during the creative process of “Light It Up”. “When one is writing a song that was born in a space of creativity, it is easy to compose new music,” shares the duo.

Los Profetas have been sweeping the independent music industry continuing to establish themselves as a significant component of Christian urban music; not only in the Spanish-speaking market, but also in the Anglo-Saxon market.  Los Profetas are ambassadors of a Latino generation that grew up in the United States and have been equally impacted by American culture as their homeland.

The “Light It Up” single is available on digital music platforms and is accompanied by its official video now available on the duo’s YouTube channel.  Los Profetas will making an appearance at the upcoming 2018 Stellar Gospel Music Awards week in Las Vegas, NV.   The dynamic duo will be performing their new single at the REP DA KING AWARD WEEKEND SHOWCASE at Club His Hop on March 23, attending the Stellar Awards show and making media appearances throughout the Stellar Awards Week.