Home / Artists / The New Single by Carl B. Phillips “Meeting In The Air” Going For Adds & Spins at Gospel Radio!

The New Single by Carl B. Phillips “Meeting In The Air” Going For Adds & Spins at Gospel Radio! 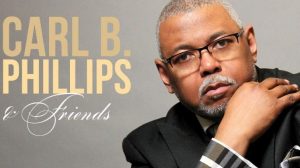 The New single entitled, “Meeting In The Air” by Carl B. Phillips who takes over the lead on this hand clapping, foot stomping, quartet-influenced song. Inspired by the words of an elderly church mother, the listener will be reminded of the hope beyond this world.

The photo on the back of the CD booklet for Carl B. Phillips & Friends’ Great Rain shows an Ivy League-attired Phillips standing next to a clock, a briefcase and umbrella in his hands. If, as the saying goes, a picture is worth a thousand words, this photo is saying that Phillips is prepared, but waiting patiently, for his bountiful shower of blessings.

Waiting with expectation for a movement from God in one’s life is a current that runs throughout this live project by Phillips, a Detroit-born singer, songwriter, producer, and radio announcer. For example, the title track encourages listeners to wait on God because He will ultimately bring succor (i.e., the great rain). On “Prove Me,” Kimberly Whitsett sings that God will “open up the windows of heaven” and answer your problems, but “by and by.” “Restore More” argues that God will not only restore what is lost but will provide “more than I ever had.”  In that case, Phillips might need a bigger umbrella.

Phillips spotlights several singers from his talented ensemble. They take turns soloing, and several extend codas to express passionate prayer or evangelistic testimony. Special props go to Chiffon Mc Neal on “I Know What God Did Last Summer,” a song with a title that riffs on the name of the 1997 thriller film but is really about Ecclesiastes 3:1-8. In other words, if times are tough this season, another season is on its way, one better because of God’s intervention. There’s that waiting with expectation theme, once more.

What distinguishes the album musically from similar leader/small choir projects is its spectacular traditional conclusion. With a prominent electric guitar and harmonica, “Meeting in the Air” is an evocation of the hereafter, where there will be “no high blood pressure, no diabetes,” among other benefits. On “Statistics,” La’Jimmease Jones eschews the reports that say “I should have been dead” with stomping affirmations of life. The message and beat transition into a praise break, which brings the album to its denouement.

Great Rain is buttressed by hard-hitting musicians who deliver a full-bodied sound, and fine ensemble singing by the “Friends,” never better than on their harmonic resolution at the end of “A Simple Praise.”

Picks: “I Know What God Did Last Summer,” “Statistics.”