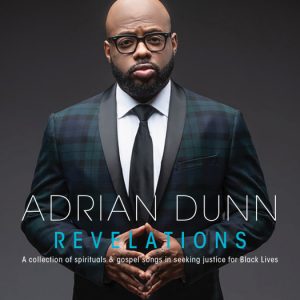 Adrian Dunn easily dons the title of master mixologist, as he has taken bits and pieces from the African American Spirituals and combined them with the new musical arrangements and harmonies resulting in his latest musical masterpiece, Revelations.  Now aligned with a hand-picked group of uniquely talented, professional and classically trained singers, Adrian Dunn is ready to embark upon the first leg of the Revelations tour beginning later this week.
“From the beginning of time, music has been a common denominator”, says Dunn.  “The early songs of the church combined with the life experiences of our forefathers conveyed lasting messages of hope and brought comfort in the midst of despair.  Even as we commemorate the 90th birthday of Dr. Martin Luther King, Jr. this week, one must realize how music played such an integral role in the movement. Who can forget Mahalia Jackson on the steps of the Lincoln Memorial singing I’ve Been Buked and I’ve Been Scorned right before Dr. King gave the most famous speech in our nation’s history, I Have a Dream. Some 50 years later, we are tasked with a sense of urgency confronting the state of affairs in our world today.  There is an immediate need to convince ourselves and others that Black Lives Matter.  I felt a strong urgency to offer these songs in light of my own personal experiences and the inequities that are commonplace in today’s society.  We have something that needs to be said, and our voices need to be heard.”
The Adrian Dunn Singers Revelations Tour fittingly begins in the nation’s capital, Washington DC at the National Cathedral on January 25th.  Tour stops for this first leg include Los Angeles/Long Beach, CA, Orlando, FL, Indianapolis, IN and Atlanta GA. Books and sheet music are available exclusively at AdrianDunn.com with Revelations going to digital retailers later this month.