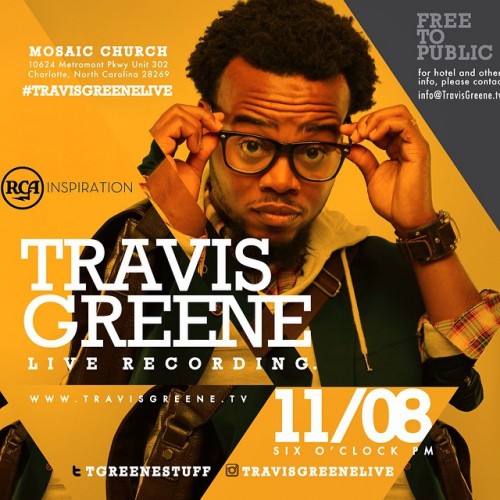 Weeks ago, RCA Inspiration caused a stir in the gospel music world when they announced the signing of artist Travis Greene to their label. The momentum continues with plans for Greene to record, THE HILL, his very first live album on November 8, 2014 in Charlotte, North Carolina.

The highly anticipated project will mark his first release on RCA Inspiration. The recording will begin at 6:00 PM at Mosaic Church and is free and open to the public. Space at the recording will be limited and early arrival is suggested.

For 30 year old singer/songwriter Travis Greene, destiny announced itself several times. Travis entered into this world with complications that threatened his survival. At the age of four, he was pronounced dead after falling four floors out of an apartment window in Germany. As his mother picked up the lifeless body of her child, she called on Jesus over-and-over, praying until he came back to life. These near fatal and precious testimonials of life preface the anointing of a young man destined to minister to the world.

Growing up in a military family in various parts of the world, Travis used music as an outlet to overcome many heart-breaking and crucial life experiences. Through his broad style of music and ministry, Travis accepts the personal challenge to continually unify the body of Christ as one. The passion that dwells in him allows him to use his gifts as an instrument to help, heal and bring positive change to the lives of God’s people. Travis, his wife Jackie, and their son, David Jace, currently reside in Charlotte, North Carolina.