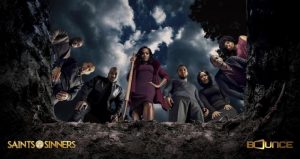 Season two brings viewers back to Cypress, Georgia, the sleepy southern town outside Atlanta which has been rocked by the murders of a beloved pastor and the town’s Mayor. Death’s shadow continues to loom over the town’s epicenter, Greater Hope Baptist Church, as a dead body is discovered on its grounds, bringing up the church’s sordid past along with it. As concealed secrets claw their way to the surface, new alliances are formed and deceit, jealousy and compromising sexual affairs threaten to shatter lives and demolish the heart of the church and the town forever. As everyone’s dark past comes to light, the difference between being a saint or a sinner becomes more distorted than ever.

During its record-breaking first season, Saints & Sinners became Bounce’s most-watched programming in the network’s history. The series was so successful, Bounce renewed the show for year two ahead of the inaugural season’s thrilling finale.

Bounce will air a marathon of the first season of Saints & Sinners on Saturday, March 4, 2017 starting at 3:00 p.m. (ET) for fans to once again enjoy, or for new viewers to binge ahead of the new season.

Bounce is the only emerging broadcast network producing original scripted series. The network’s three originally-produced sitcoms Mann & Wife, In The Cut and Family Time have all seen ratings grow season after season.

Bounce (@BounceTV) airs on the broadcast signals of local television stations and corresponding cable carriage and features a programming mix of original and off-network series, theatrical motion pictures, specials, live sports and more.  Bounce has grown to be available in more than 94 million homes across the United States and 93% of all African-American (AA) television homes, including all the top AA television markets. Among the founders of Bounce are iconic American figures Ambassador Andrew Young and Martin Luther King, III.