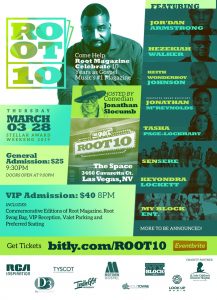 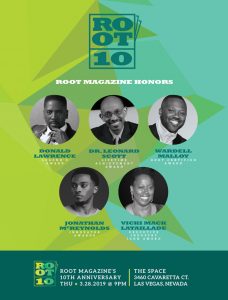 The evening will commence with a VIP screening of the documentary “Rooted and Grounded: The Evolution of Gospel Music”. A production seven years in the making, the film is ROOT Magazine’s Editor-In-Chief, Hasan James’, “Labor of love” and will showcase the impact Gospel music has had in the music industry and the world.  The documentary features the likes of Cissy Houston, Tasha Cobbs-Leonard, CeCe Winans, Bishop Albert Jamison and more.

ROOT Magazine has become one of the premier publications in gospel music, producing cover stories for Grammy winning artist such as Kirk Franklin, Mary Mary, Hezekiah Walker and many more. In June 2009, the inaugural issue of Root was released and in just a few short years, Root has partnered with multi-million dollar corporations like BET, Global United Fellowship, The Merge Summit,  I Hear Music, GMWA and BMI to produce one of a kind magazines and journals.