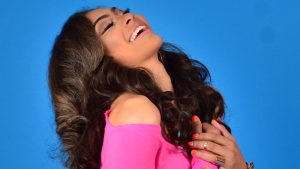 Social media singing star Briana “Bri” Babineaux has done it again. Over the last year, she has posted several singing videos on Facebook that have netted millions of views. This past week, a fan posted a video on Facebook of Bri singing “He’s Able” and it’s garnered over 6.8 million views within six days and won her a new fan in Grammy® Award winning vocalist Donnie McClurkin.  “I’ve been listening to you all morning long and the anointing you carry is so full and genuine…,” he wrote on Facebook. “I look forward to sitting in your ministry one day and experiencing first hand what I’m experiencing online.”

Fans will experience that throughout the month of July as Bri kicks off the second leg of the  “New Artist on the Block” tour Tuesday, July 5th at The Celebration of Life Church in Hendersonville, TN.  The first leg of the tour launched in March, selling-out all seven cities and earning a major New York Times write-up revolving around Babineaux’s meteoric rise to fame. This incarnation of the tour also features Geoffrey Golden from BET’s reality TV show “Sunday Best” and YouTube singing sensation Kelontae Gavin.

Meanwhile, Bri’s new self-penned gospel radio single “Jacob’s Song” is also picking up heat. It’s receiving airplay on a dozen gospel radio stations including four new pick-ups this week such as WDJL-AM (Huntsville, AL), WFMV-FM (Columbia, SC), WEAM-FM (Columbus, GA) and WFAI-AM (Wilmington, DE). “It came from a place of determination,” she says. “I had been going through so much in my personal life and I was determined to be just like Jacob was in the Bible and I told God that I’m not letting go until you bless me. So this song means the world to me because it came from an experience that I overcame.”