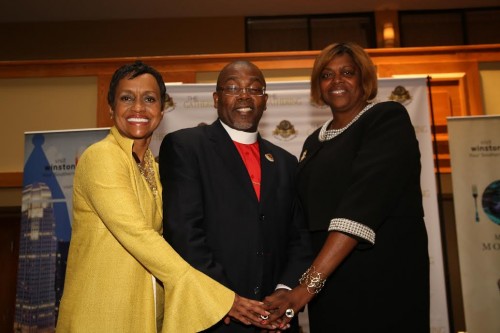 Interdenominational unity and overwhelming love for God and God’s people saturated the Benton Convention Center in Winston Salem, North Carolina as Global United Fellowship (GUF) recently hosted its inaugural conference – The Gathering – in the charming southern city.  With exceptional ministry and marketplace workshops; transformative prayer, praise and worship; and fiery, impassioned, empowering preaching –  THE GATHERING 2014 set a tone of elevated excellence and vigorous pursuit of The Great Commission that undergirds Global United Fellowship, which in less than one year old but has made extraordinary strides and impact with membership currently comprised of over 400 churches representing five Continents and approximately 20 denominations.

“My heart is filled with both gratitude and an overwhelming sense of the magnitude of this God-given assignment,” said Bishop Ellis in his inaugural address. “It’s Big….it’s Exciting….it’s Scary but I am confident that it’s all God…I believe with all my heart that Almighty God has raised up this Fellowship to intensify the process of bringing the Body of Christ into a greater dimension of unity.  This assignment is great and the call is urgent.”

Bishop Ellis also announced three major initiatives for the coming year: 1) Project Clean Water – In strategic partnership with the Fellowship’s Official Mission Arm, PraiseFest Ministries, GUF will bring clean drinking water to needy families around the world and have an immediate impact in approximately 170 countries; 2) The Feeding Initiative – GUF will address the growing hunger epidemic among  children in North America through a program that will endeavor to feed one million children for the length of their 2015 Summer Vacation, and 3) Prison Re-entry and Restorative Justice Initiative – Through this initiative, GUF will assist with meeting the needs and addressing the frustrations of men and women re-entering mainstream society and their family homes from prison.

Prime Minister of The Bahamas Perry Christie flew in with a delegation of dignitaries, and addressed The Gathering with deep respect for what has been accomplished under Bishop Ellis’ leadership and God-given vision. “It is always an important function to note those who are impactful personalities in our country,” he said. “I am here today to authenticate that there is a Bahamian that God imbued with a vision and with a spirit of when you are knocked down, you get back up…You (GUF members and delegates) are part of an historic movement, and there is no ceiling to this.”

Marvin Sapp, whose appointment as Global Leader of the Central Province of The United States was announced during the conference, says “I was thoroughly impressed with The Gathering and how it represented GUF’s wholistic approach to ministry. I took my daughters so that they could experience Global and get a first-hand view of what we are embarking upon. They were extremely excited to be a part of something fresh and vibrant, and something with a strong youth element. That’s major in ministry. Global is not only thinking internationally; and it isn’t satisfied with just having preachers, pastors and bishops coming together – Global is thinking about and embracing the totality of the family. This was evident at The Gathering and it is a huge reason why I am excited about Global United Fellowship.”

Judge Glenda Hatchett, GUF’s Spokesperson for Family, says “people all over the world are facing enormous challenges and I deeply believe Bishop Ellis has been called to global service by God for such a time as this.

The Gathering touched my soul and reassured me that there is enormous potential among us to affect positive change in the world as we minister to the needs of God’s people. It is my special privilege to support the critically important mission of Global United Fellowship as we move our communities, our nations and, in turn, the world to higher ground.”

On the final evening of the event, it was announced that The Gathering 2015 will be held in Jacksonville, Florida – and Mayor Alvin Brown welcomed GUF by presenting Bishop Neil Ellis with the key to the city.