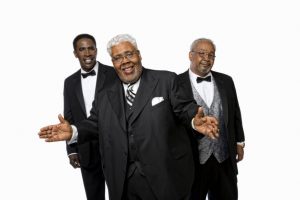 The legendary trio of blood brothers, The Rance Allen Group, will release its 25th album “Live From San Francisco” (Tyscot Records) and a separate DVD of it today October 28th. The group pioneered the fusion of R&B-styled rhythms with spiritual and message music themes in the 1970s. It’s a winning style that has won them fans as varied as American Idol’s Randy Jackson, Kirk Franklin, `80s rockers Huey Lewis & The News and Fred Hammond. They continue to labor in this unique musical vineyard on the new eleven-song set that was recorded live at the Bay area’s Richmond Memorial Auditorium.

Rance Allen will be a guest on the “Get Up! Mornings with Erica Campbell” syndicated radio show on 10/28 @8:11 AM EST to talk about the project. He’ll also be a guest on “Sunday Praise with J.J. Hairston” this Sunday 10/25 on Hot 93.7 FM in Hartford, CT and with “The Big Rube & Sctonda Morning Show” on 1380 AM in N. Augusta, SC this Wednesday November 3rd. Over the next week, Allen will also be a guest on the syndicated program “The Nightly Spirit with Darlene McCoy” and SOAR Radio. He’s going to hit other radio stations around the country such as WLOU (Louisville, KY), WMBM (N. Miami, FL) and KUT (Austin, TX) with more to follow.
The album’s first radio single “All Day Long” is a warm, uplifting song of praise set to a smooth and mellow R&B flavored groove with a Jazzy horn arrangement.  It climaxes in a crescendo of cymbals, drums, thick harmonies and Rance Allen’s lion-like roar of a wail.  The project features new songs such as the ballad “My Delight” (led by Steve Allen), the quartet-styled stomper ‘Hold On” and the soulful tune “Vessel” that is guaranteed to raise the heaviest of roofs.
The groups also dusts off some stellar B-sides from past albums and gives them new arrangements such as the old school soul of “Like A Good Neighbor” and the funk of  “I’m Not Givin’ Up Givin’ Out Givin’ Givin’ In” that is lead by Tom Allen. The group provides some dance-floor rhythms with songs such as “Got Me Dancin’,” “Can’t Give Up (The Groove)” and “Victory Dance.” The collection is rounded out with fan favorites such as the group’s signature songs  “Miracle Worker” and “Something About The Name Jesus.”

The Rance Allen Group was formed in 1965 in Monroe, MI as a self-contained band. In 1972, they signed to Stax Records’ Gospel Truth subsidiary where they recorded a series of gritty gospel songs that won them main-stage tours with R&B headliners such as Isaac Hayes and Barry White. They went on to record a number of gospel classics such as “You That I Trust,” Do Your Will” and “I Belong To You.” The group was honored with the BMI Trailblazer Award in 2008.