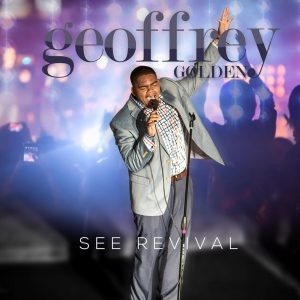 Called and uniquely anointed to reach generations for the cause of Christ, singer, composer, preacher and worship leader Geoffrey Golden ushers in the spirit of revival with the release of See Revival, the first single from his live disc recorded last year in June.  His debut offering,  Kingdom Live was released in 2015 produced by Kirk Franklin and garnered critical praise and rave reviews.  The new single hits digital outlets and streaming platforms on Friday, April 20th. The Season 7 Winner of Sunday Best embarks upon a newendeavor collaborating with his brothers Reggie and Kevin to form Golden Brothers Music Group and recently announced a partnership with Red Alliance Media and Fair Trade Services For distribution.

Geoffrey shared his excitement with these words, “Many families are united around sports and other professions. But music has been our blessing.  Our family ties have been God and music. From the beginning at our church in Cleveland to doing music at the National Convention of Gospel Choirs and Choruses,  its been a great experience. We have been blessed to do ministry together, but this is a new level of collaboration, we had things where two of us have been working together but its been pretty rare that the three of us would get together to work on a big project. I am excited about this project.”

Geoffrey began promotion for the single release with A Night of Worship on Sunday, April 15th at Atlanta’s All Nations Worship Assembly before heading to Chicago for ministry and the planning sessions for the National Convention of Gospel Choirs and Choruses. The single heads to radio this week as Golden mounts a multi city promo tour in the coming week.