Martha Munizzi releases new singles He Has Won and Fearless! 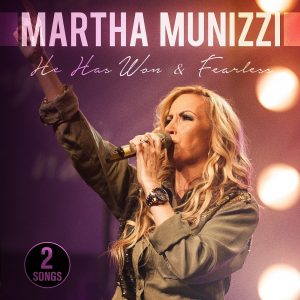 Award-winning beloved artist Martha Munizzi kicks off a new chapter, as the inspirational GRAMMY®-nominated, Dove and Stellar Award-winner delivers a two-fold blessing of new music, with the release of dual digital singles “He Has Won” and “Fearless”.  Available at all digital providers now, with two powerhouse live performances just in time to celebrate the miracle of Easter, “He Has Won” and “Fearless” plant a path to victory, proclaiming God’s awesome power and everlasting gifts in uplifting our lives.

Soak in this worship experience celebration on Martha’s singles “He Has Won” and “Fearless” – marking her first release of new music in over six years – as she galvanizes the live crowd with the progressive style and captivating ministry that have made her an acclaimed praise and worship leader, and garnered a wide-reaching impact in her career as one of the best-selling independent artists in contemporary gospel.

Following on her previous live-recorded hit album Make It Loud, Martha also continues to lead ministry in her native Florida, at EpicLife Church with her husband Dan Munizzi in Orlando.

Martha Munizzi says: “I believe that this record is an extension of some of the miraculous things that God has been doing in my life over the last few years. He has literally pushed me out of my comfort zone into greater realms of faith. As a result, the songs on this project are songs that speak only of what I believe to be true. ‘Fearless’ is a warfare anthem that is a call to action for believers who have been tested and are battle ready. It’s for those of us who know when they let out a shout of praise that they will find the courage to believe that God will intervene on their behalf.

‘He Has Won’ is a song that expresses our confidence and assurance about God’s unconditional love and forgiveness, and is a declaration of absolute certainty that God has won the victory for us on the cross! I’m praying that these new songs will help create an atmosphere of God’s presence through celebration and declaration that will cause followers of Christ to live a life of great courage and faith!”