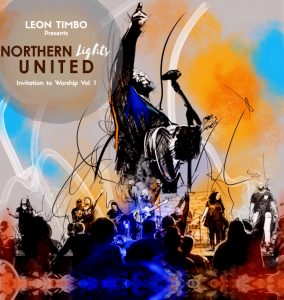 Leon Timbo easily describes himself as a guy with a guitar (among his greatest inspirations is Fred Hammond) who loves God and music.  The mood changes, however,  when called to worship, the lights come on and Timbo transports you to a place where worship flows freely.  Such is the case with his worship disc, Invitation to Worship, Volume 1 (Eone Entertainment), which pairs him in a collaborative effort with a group of light bearers aptly called Northern Lights United.  Timbo says of the group, “Think Sounds of Blackness or Kirk Franklin’s The Family and God’s Property if you will.” The multiracial collective’s members hail from Cleveland, Chicago, New York and Sweden. “We are different individuals from different walks of life,” adds Leon, “coming together to share our faith-filled, God-focused perspectives.”

Timbo and company pull on various music styles to present their worship offering.  GOSPELflava Senior Editor Gregory Gay states, “from beginning to end, Northern Lights United steps to the plate while delivering a full course meal.  Of special note is the cover of the anthemically poignant Abba.  “Abba shakes the foundation of the earth, and all of Heaven responds in agreement.”

As the centrifugal force behind Northern Lights, Leon embraces both the spiritual and soulful music worlds. The Jacksonville, Florida native grew up as the son of two pastors in Jacksonville, Florida. “What moved me were the messages and the music in the church services,” he remembers. “One day when I was 16, I made an ambiguous prayer to God about me and music. Suddenly everything about the way that I heard music changed. Words became very impactful.”

Now an emerging force on the R&B front, Leon hasn’t forgotten his roots. “I’m still a preacher’s kid,” he notes, “and I want to serve where that’s expanded to. We live in an age where you don’t have to hide your faith. You can be super bold on both fronts.”

Invitation To Worship is available now on all digital outlets.