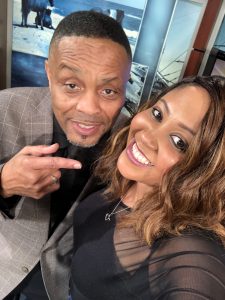 Four-time Stellar Gospel Music Award winning radio personality Lee Michaels is working overtime to make his sixth annual East Coast Gospel Music Summit the best one yet.  This year’s event begins on Sunday October 29th with “The Choir Storm” at John’s Hopkins Turner Auditorium.  The festivities continue on Friday, November 3rd and Saturday, November 4th at The Empowerment Temple, 4715 Primrose Avenue in Baltimore, MD.  “The summit   gives aspiring recording artists and musicians an opportunity to learn various aspects of the business side of the entertainment world,” says Michaels. “It’s a chance for them to showcase their talents, stay on top of changing industry trends and network with industry professionals who may be able to help them fulfill their goals.”

Some of the artists showing up to perform or to share their knowledge of the music business include Grammy® Award nominated songwriter, Cheryl Fortune, as well as, Billboard charting independent artists such as Ted Winn, Troy Snead, G.I., Miranda Curtis, Charles Butler & Trinity, Isabel Davis, Earnest Pugh and Lucinda Moore. Stars on the rise such as Asia Luckey, Tracy Neal, Minister Isaiah Thomas, Robert J and Norris Williams will be there too. Some of the top behind-the-scenes executives in the entertainment world are coming to judge and evaluate the artist showcases and offer advice on various panels.

After serving in the military and studying at the Broadcast Institute of Maryland, Michaels began his broadcasting career at various radio stations in Maryland in the 1980s.  He came to WCAO 600 AM as an announcer in 1991 and was promoted to program director in 1994. The station has been Baltimore’s #1 gospel radio station ever since. He is also the pastor of Manifest Wonders Christian Center and hosts the weekly TV program “Grace & Glory” that airs on WMAR Channel 2 (an ABC affiliate).