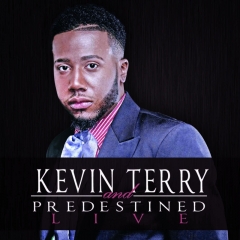 Washington, DC based gospel choir Kevin Terry and Predestined have established quite a name for themselves.  Their debut CD release Kevin Terry and Predestined Live  was released this fall on Kingdom Music Group and Central South Distribution. Their high energy single “Hold On” has gained favorable positions on both Mediabase and BDS Gospel radio charts.  Although a young and new choir, the group is being noted for their musicianship skill and well rehearsed vocals as well as amazing principal vocals on each track.
The electrifying presence of the group and authentic gospel choir sound has garnered them six Rhythm of Gospel Award Nominations.  They are one of the very few nominees to garner six or more nominations