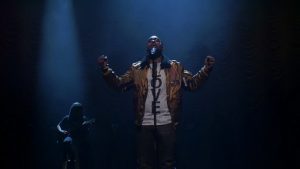 “Love Song”, the new single from Kenny Lewis & One Voice, is the first release from the group’s upcoming album Refocus. The resplendent song was written and produced by Kenny Lewis, and features the soaring vocals of his Chicago-based ensemble One Voice.

“In this season of chaos, I believe the saints’ job is to love God,” says Lewis. “This song is a really simple message to God. Love is a simple concept; it’s important that everyone understands the message. You don’t need to be a biblical scholar to understand the simplicity of loving God.”

A performance video for “Love Song” was released this week, and can be viewed on the group’s YouTube Channel. Preview the video here: https://youtu.be/J6BTwNPUzlI

Hailing from the birthplace of Gospel music, Chicago, IL, Kenny Lewis was a featured vocalist on songs by Mark Hubbard and Ricky Dillard before starting One Voice. “When people hear us sing, my prayer is that they not just hear soprano, alto, and tenor, but that they hear one voice, the voice of the Lord,” Lewis says of the group.

Refocus will be the 5th release from the Stellar Award nominated ensemble. The full length project is expected to be released early this summer.

Kenny Lewis is minister of music at St. John’s Baptist Church in Chicago.