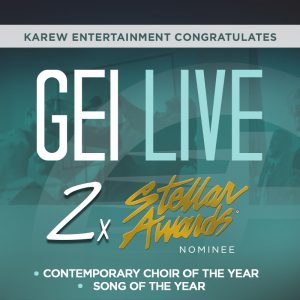 KAREW Entertainment, home of the Grammy Award winning Clark Sisters and multiple award winners Karen Clark Sheard and Kierra Sheard, is are excited to announce two Stellar Gospel Music Award nominations for their hometown choir, GEI and it’s #1 Billboard song, “Hang On.”
The label celebrates double nominations for first time nominees and Billboard’s 2017 “Rookie of the Year,” GEI. GEI picked up a nominations for Contemporary Choir of the Year and Song of the Year for their #1 Billboard Gospel single, “Hang On.”
Recorded within the walls of Bishop J. Drew Sheard and Karen Clark Sheard’s Greater Emmanuel Institutional (GEI) C.O.G.I.C. in Detroit, the album, “GEI LIVE” made a Top 5 debut on Billboard’s Top Gospel Albums chart upon its release, and showcases twelve other tracks of powerful live performances with refreshing enthusiasm, love and celebration for God’s blessings available to everyone. Backed by the GEI Mass Choir, the GEI LIVE album experience includes “Press On” (feat. Bishop J. Drew Sheard),” “I Owe You Praise” (feat. Karen Clark Sheard), “Look To the Hills” (feat. The Clark Sisters), an original hymn “I’m In His Arms” (feat. Dorinda Clark Cole), “My God Is Real” and more.
“I am excited about presenting the future of Karew Entertainment to the world. Karew is now expanding from just a record label to a full entertainment company including multi-genre music, film, fashion, and more. We are a team of young and innovative millennials working together to build timeless projects. We are currently still building and it only gets better,” says President & CEO of Karew Entertainment, J. Drew Sheard II.
KAREW Entertainment’s current roster includes: Karen Clark Sheard, Kierra Sheard and The Clark Sisters, who were recently sampled on rapper Jay Z’s 4:44 album.
The 33rd Annual Stellar Awards will be taped March 24 in Las Vegas, NV.
Advertisements