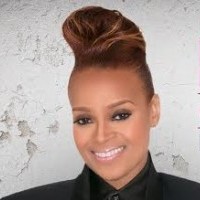 On Friday July 17, 2015, music icon Karen Clark Sheard makes a powerful declaration of praise and victory with the release of her highly-anticipated new album Destined To Win, with album pre-ordering available now.  Ushering in her sixth solo project and her second solo album to be released on her record label Karew Records, the 4-time GRAMMY®-winning gospel superstar’s renowned voice and captivating performance style come together before a packed audience of listeners to create a powerhouse live album experience on the 10-track album.

Recorded live in an historic night at Chicago’s House of Hope, Karen Clark Sheard delivers a bold statement of faith and spiritual encouragement on Destined To Win, teaming up with long-time collaborator Donald Lawrence, who produced the album along with Daniel Weatherspoon, as well as her son J. Drew Sheard II, who produced the song “My God Is Big.”

Karen Clark Sheard shares, “I’ve had some tests and trials….but I kept pushing through. God gave me a word that you have to speak because your words have power. I want the album to be a driving force to move people to where they need to be.”

Exalting faith and inspiring listeners to find strength in facing adversity through God’s constant love and guidance, Karen Clark Sheard’s spectacular vocals and impassioned ministry permeate throughout the album – from tracks such as “Destined To Win,” “Already Looking Better,” the acclaimed singles “My Words Have Power” (feat. Donald Lawrence & The Co.) and the GRAMMY®-nominated “Sunday AM” – to “The Who Doesn’t Matter” (feat. Faith Evans), a stunning performance of Richard Smallwood’s “The Resurrection,” and more.

Clark Sheard also adds a surprise family moment in a special performance of Andraé Crouch’s “Where Jesus Is,” reuniting The Clark Sisters and daughter Kierra Sheard to join her on stage, along with singer Kim McFarland, for a medley that is featured as three bonus tracks on the Walmart exclusive version of Destined To Win.