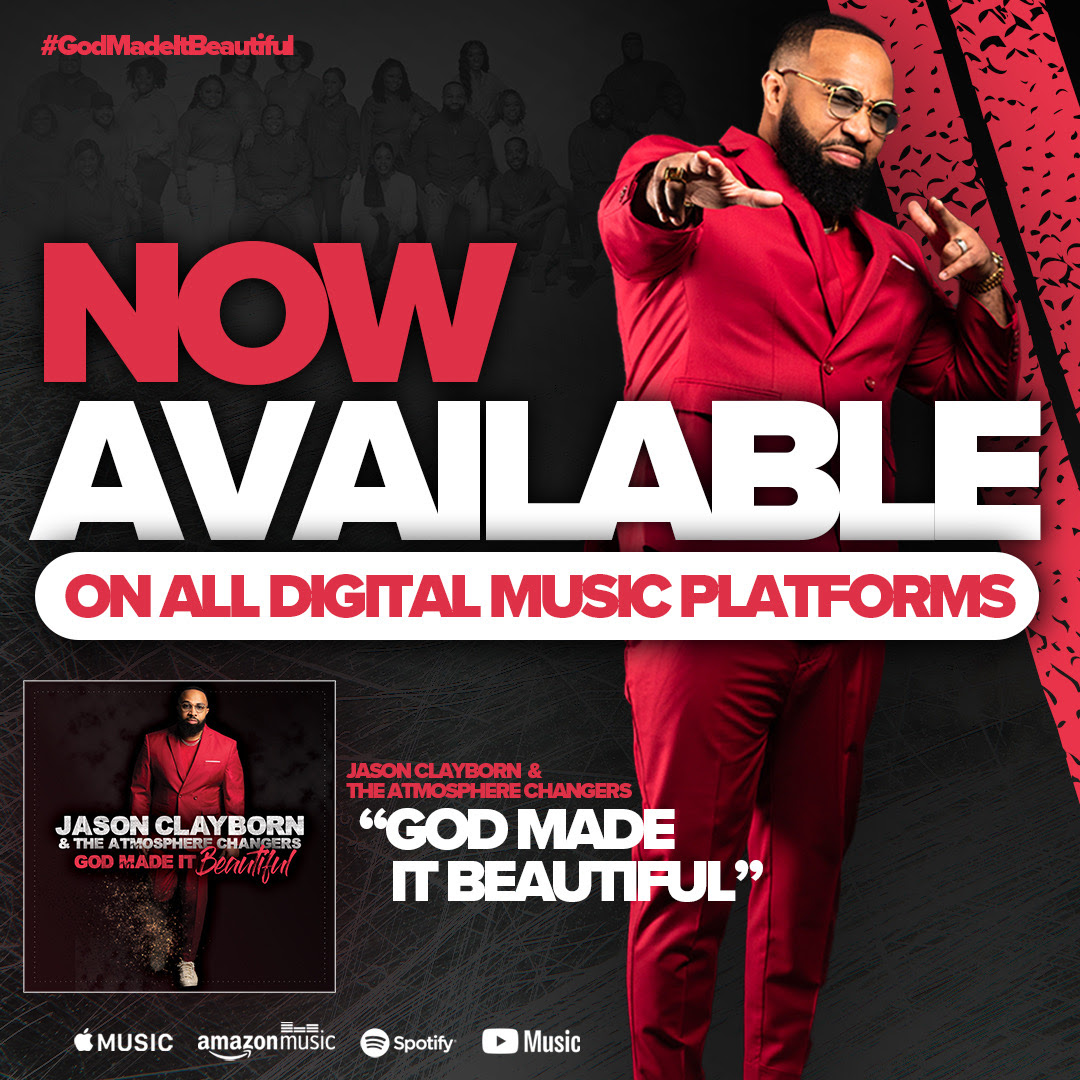 Grammy-nominated songwriter and singer Jason Clayborn and his incredible group, The Atmosphere Changers, have just released their brand new album, “God Made it Beautiful” and its available now on all major streaming platforms.  This album has been in the making for several years and fans are excited to hear the news!  This 13 song album encompasses other hits from the group that include “Praise Belongs to You”, the album’s title track “God Made it Beautiful”, and the leading single, “You’re All I Need (remix)” featuring Bishop Hezekiah Walker.

To help celebrate the release of his new album, which also happens to be the same weekend of his 40th birthday, Jason Clayborn & The Atmosphere Changers will also be in concert virtually via Facebook Live on Friday, May 28, 2021 at 8pm EST. On Sunday, May 30, Clayborn’s actual birthday, the full music video of “You’re All I Need (remix)” featuring Bishop Hezekiah Walker, will also be released! The virtual concert can be viewed through three page options: Jason Clayborn & The Atmosphere Changers, Jason Clayborn Secondpage, and Set Apart and Chosen Facebook page. “I’m so excited about all of the wonderful things that God is doing in this season…” says, Clayborn. He continues, “I feel like the music and the message of this record is what I believe people need to hear right now.”

This body of music is said to be a “no skip” album, says Clayborn. He even compares it to one of gospel music’s highest selling albums, God’s Property by gospel music legend, Kirk Franklin. Clayborn feels, much like God’s Property, that this is an album that has a song for everyone.  However if there were songs that he’s most excited for people to hear, he highlights “U Love Me” featuring Shantell Hankerson, “Do it Now” featuring Dominique Thompson, “Peace Grace and Mercy” featuring Carol Kirby-Green, and “Send Me”. However, he also says, “It’s really too hard to narrow down because the whole album is good!”

When asked about the overall message that he wants fans to remember, Clayborn says, “Remember that God can make any situation beautiful in your life. The process is beautiful even if it feels bad and you feel like you’re sowing in your ministry and in your business, but you don’t feel like its going to happen in the time that it was supposed to happen, but God can take any situation and make it beautiful.”

When asked about his final thoughts on the album, “I love God. I love what I do, and I love being able to write songs and watch them bless other people.”