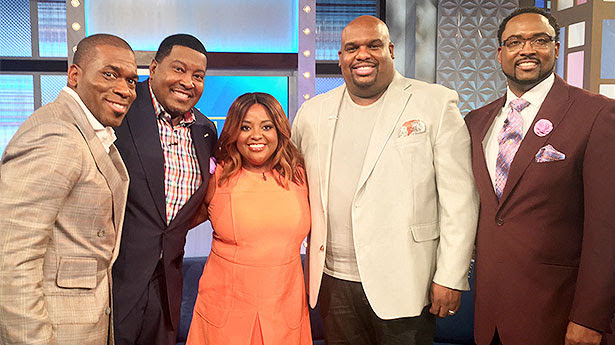 New daytime television talk show The Preachers, which debuted yesterday for a three-week preview on select FOX Television Stations, announces its initial lineup of dynamic and inspiring guests that will appear during the show’s first week, beginning today, Monday, July 11. Hosted by four outspoken preachers known for their unique perspective – John Gray (Associate Pastor at Lakewood Church in Houston, under the leadership of Pastor Joel Osteen),Dr. E. Dewey Smith, Jr. (Senior Pastor/Teacher at The House of Hope Atlanta and The House of Hope Macon), Orrick Quick (Pastor and Founder of God Seekers Church in High Point, North Carolina) and Dr. Jamal Bryant (Pastor and Founder of Empowerment Temple AME Church in Baltimore) – the show promises to provide a daily cup of inspiration and hope to its viewers.

In the premiere episode airing on Monday, July 11, the four preachers sat down with actress/comedian/author Sherri Shepherd, one of the stars of the upcoming NBC comedy Trial & Error, for a frank discussion about life in America in light of recent social and political turmoil. Shepherd revealed her own concern about raising a black son with special needs in the wake of the shooting deaths of African-American males Alton Sterling and Philando Castile, as well as the killing of police officers during a civil protest in Dallas. In the clip below, the actress and four preachers share how the #BlackLivesMatter movement is more important than ever and what viewers can do about it.

Also, Pastor John Gray and Pastor Jamal Bryant discussed in further detail their own experience of being racially profiled and America’s racial tensions.

On the same episode, the preachers lighten it up by also talking with Dancing with the Stars and America’s Next Top Model winner Nyle DiMarco, an activist for the Deaf who shares his inspiring story.

On the Tuesday, July 12, show, The Preachers welcome Oscar®-winning actress and radio personality Mo’Nique, who discusses her latest projects as well as her controversial open marriage with husband Sidney Hicks.

On Wednesday, July 13, The Preachers have an exclusive sit-down with Survivor’s Remorse star Tichina Arnold who for the first-time ever, discusses the infamous text messages regarding her divorce, and The Preachers also welcome reality star-turned-preacher Omarosa.

The Thursday, July 14, show features Basketball Wives’ creator Shaunie O’Neal, and cast mates Jackie Christie and Malaysia Pargo who share ahead of their new season how life has changed since their first day on the hit reality show.

Rounding out premiere week of The Preachers on Friday, July 15, actress Ta’Rhonda Jones of FOX’s Empire plus actress/gospel singer Joy Enriquez, who is joined by her music hitmaker husband, Rodney Jerkins, and their young daughter, Heavenly Joy (Little Big Shots) stop by.

The Preachers will air from July 11-29 on the FOX Television stations in New York, Los Angeles, Philadelphia, Dallas, Washington, D.C., Atlanta, Phoenix, Houston, Orlando (Florida) and Charlotte (North Carolina). The series is executive produced by Emmy® Award winner Bill Geddie, who returns to daytime television after 17 seasons as the co-creator and longtime executive producer of The View. Jeff Gaspin, Andrew Glassman also serve as executive producers with Amy Coleman as co-executive producer. The show is a fun and energetic hour with moments of true inspiration. Collectively, the preachers have counseled thousands of people throughout America. Now it’s their turn to bring usable information, up-lifting inspiration and actionable motivation to television audiences everywhere. The Preachers is produced by Telepictures.