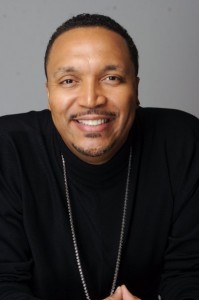 Kevin Bond is perhaps the finest producer in the gospel music industry today! In many circles he has been dubbed “The Million Music Maker.” Few could argue with that assertion or his credentials, as his name and production credits have thoroughly permeated the most prominent gospel CD and cassette jackets over the past 20 years

Dr. Bond has experienced overwhelming success as a producer in recent years! His leadership and production expertise have been vital to the success of some of gospel music’s most recognizable artists; including Kirk Franklin, God’s Property, Donnie McClurkin, Yolanda Adams, Bishop T.D. Jakes and The Potter’s House Mass Choir, Marvin Sapp, and host of others. He was even commissioned by Steven Spielberg to produce a song for the Prince of Egypt soundtrack. His works have garnered an astounding 10 Grammy Awards, 30 Stellar Awards, and numerous other awards!

Christian Bible Institute and Seminary is an accredited Seminary located in Houston Texas where Dr. Tony V. Lewis is the President and Founder.