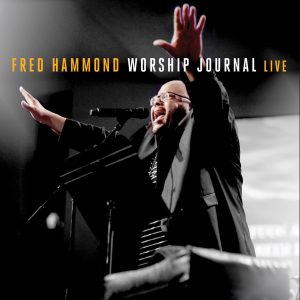 WORSHIP JOURNAL LIVE is Hammond’s first live recording in 17 years and features the popular single “Father Jesus Spirit.” Filled with the dynamic ministry and acclaimed live musicianship that has made him one of gospel’s most popular and influential artists over the past 30 years, WORSHIP JOURNAL LIVE follows on Hammond’s most recent chart-topping release I Will Trust (2014).

“This album is very autobiographical but I think my listeners will find a lot of the themes to be universal,” said Fred Hammond. “We all struggle. We all worry. We all question our paths. We all need inspiration. Belief in our Lord and Savior and his ability to deliver us through all of that – that’s what I wish for my listeners to always carry with them.”

Maintaining a busy schedule throughout the rest of 2016, Hammond will bring his stellar live concert performances to fans across the country, with a national tour kicking off in conjunction with his new album’s release.  Helming the Festival of Praise 2016 Tour, the star-studded annual tour he founded, Hammond kicks off the third consecutive year of the Festival of Praise Tour on October 1, 2016 in Seattle, WA, welcoming a revolving all-star artist lineup that includes Hezekiah Walker, Israel Houghton, Regina Belle, Karen Clark Sheard, Casey J, and comedian Earthquake.  Running through December, Hammond plans to take the Festival of Praise 2016 Tour to over 50 cities, hitting Los Angeles, Denver, Atlanta, New York, Washington DC, Pittsburgh, Austin, his native Detroit, and more.

5. I Will Sing Hallelujah

9. Worthy Is The Lamb

For over three amazing decades, singer/songwriter/producer/musician Fred Hammond has been a gospel music arbiter, consistently pushing the genre into new melodic territory.  The Detroit native ascended from bass-playing sideman for The Winans; to founding member of the trendsetting sextet Commissioned; to creating the further renowned ensemble Radical for Christ, to becoming a highly influential solo artist and producer in his own right.  Unforgettable songs such as “Blessed,” No Weapon,” “King of Glory,” “Celebrate (He Lives),” “Let the Praise Begin” and more have lifted the spirits of millions both cross-culturally and cross-generationally.  His 1998 release PAGES OF LIFE: CHAPTERS 1 & 2 is a double platinum-seller and his award wins over the years have recognized his excellence in all areas upfront (Best Male Vocalist, Best Album and Best Song) as well as behind the scenes (for songwriting and producing).  Fred Hammond is the recipient of multiple Stellar and Dove Awards and received a GRAMMY® Award for Best Contemporary R&B Gospel Album for FREE TO WORSHIP.