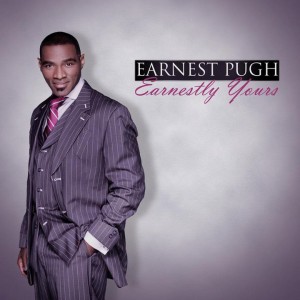 Earnest Pugh is gospel music’s new leading man. His fourth CD “Earnestly Yours” debuted at #1 on last week’s Billboard Top Gospel Albums chart and maintains the position this week. It’s also the first #1 CD debut in Houston-based Black Smoke Music World Wide’s sixteen-year history. “I am truly humbled by this new milestone in our history,” says CEO Kerry Douglas whose New Deal University marketing concepts have propelled artists such as James Fortune & FIYA to gospel rock star status with #1 radio hits like “I Trust You” and “I Believe.”

“What was once a dream has now become a reality,” Pugh adds. “Kerry Douglas and the Black Smoke Music Worldwide team made this possible with their incredible marketing and distribution network. I never dreamed of having a #1 single on iTunes nor a #1 CD on Billboard. This moment is so surreal and I am humbled and I feel so unworthy. For anyone who has ever been shut out, put out, overlooked or rejected, I dedicate this CD to you in hopes of encouraging you to hold on to your dreams and turn them into reality.”

Douglas is turning Pugh’s dreams into reality. Last year, Billboard named Pugh the #4 gospel radio airplay artist of 2010 and Black Smoke was named the #1 independent gospel label of the year. “Earnest is gospel music’s new leading man,” Douglas says. “He will be one of the biggest artists of the next decade.” Facts are on his side too. Pugh’s latest radio single “I Need Your Glory” moved up to #8 on Billboard’s Hot Gospel Songs chart this week and it’s one of the fastest-selling gospel digital downloads this year.

A Memphis native who was mentored by O’Landa Draper & the Associates back in the 1990s, Pugh released his first solo CD in 2006 and showed off his five-octave vocals on the radio hit “Wrapped Up, Tied Up, Tangled Up.” After years of making respectable forays into gospel, Pugh finally hit it big in 2009 with his #1 smash “Rain On Us.” Visit www.earnestpugh.com or www.mrkerrydouglas.com for more information on this exciting artist.