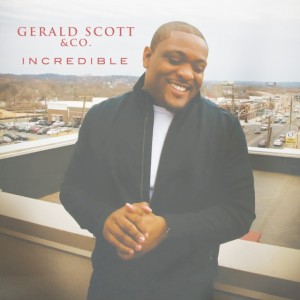 For the last five years, Gerald Scott & Co. has been one of the DMV (Washington, D.C., Maryland and Virginia area) metroplex’s top local acts and now the dynamic ensemble is poised to become one of the nation’s leading gospel acts. Although, the group has released two successful indie projects in the past, they are stepping up their game with their third CD release, “Incredible”, which will be released by Baltimore, MD-based Habakkuk Music on July 17th.

The bouncy radio single, “Alright,” is reminiscent of a new wave Earth Wind & Fire `70s jam. “We’ve been getting amazing feedback from it,” says Scott. “It’s very uplifting and encouraging. I like to call it a great song you can roll your windows down and ride to, so people are loving it and I’m just glad about that.” Many people are glad and Scott and company are picking up fans in high places. Stellar Award winning gospel artist, Jonathan Nelson, says, “His music is refreshing” and renowned worship leader, Stephen Hurd, adds that, “God is using Gerald in a way that will reach far and wide and touch people.”

“Gerald Scott is a phenomenal songwriter,” says Habakkuk CEO, April Washington Essex. “It’s like he writes from the heart of God. What’s more, he’s got the whole package: anointed ministry, great vocals & arrangements, exciting performance and he’s still young!”  Scott composed and produced all of the ten songs on the “Incredible” CD that ranges from lush, congregational worship tunes such as “Higher” to the ferocious rock vibe of “No Condemnation.”  In between there are down-home church songs like “God is Good”, the pop-styled ballad “Back With You” and the exhilarating rhythm of the title tune. Each track shows off not only Scott’s warmly earnest tenor but also the rich harmonies of the Co.

This amazing cluster of voices will premiere this bold musical project on Saturday, July 14th @ 6 p.m. at The Master’s Child Church & Worship Center located at

2001 Brooks Drive, District Heights, MD 20747. Tia Mintze (who’s collaborated with Will Smith), rapper Claude Deuce and Rev. Anika Brown will all make appearances at the CD release concert. “We’re going up and down the east coast promoting this CD,” says Scott. “We’re going to be everywhere each weekend – from New York to Orlando, Florida.” Follow the group on Twitter #gscottco or visit www.habakkuk music.com for more information on the label.